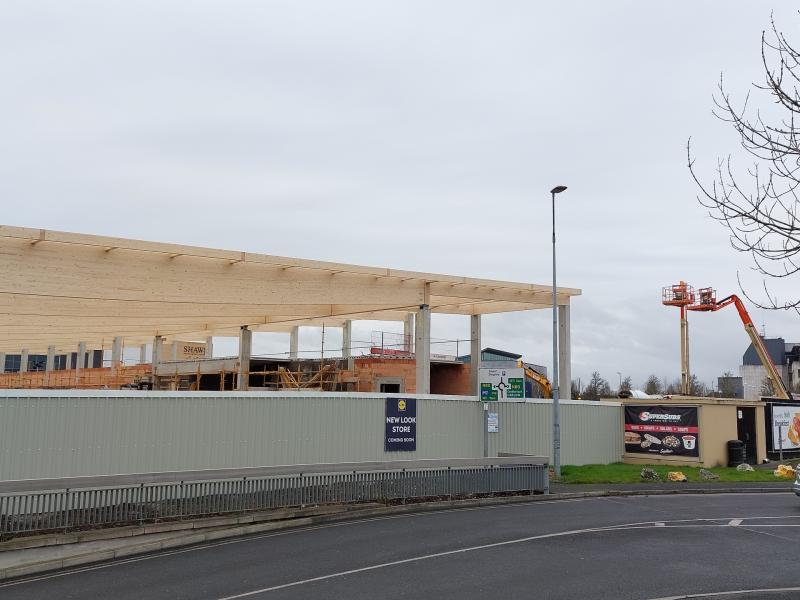 The roof is going on already in Portlaoise

Lidl is to recruit more than 750 new employees to its Irish operations this year in a variety of staff for its shops and the supermarket says it is recognising the efforts of their frontline workers with €50,000 pot for Laois employees.

The German owned firm says operational and office-based roles across its store network of 214 store locations, 4 regional distribution centres and Dublin head office, adding to the team of more than 6,000 in the Republic of Ireland & Northern Ireland.

It says the new roles are being created to support Lidl’s expansion which includes a new shop in Portlaoise which is a multi-million euro investment.

The James Fintan Lalor Avenue shop is set to open in May and new pictures take by the Leinster Express show that the roof is already under construction.

The chain says that in line with recent announcement of €550 million expansion plan to take place over the next three years, Lidl is also announcing a €10 million investment in pay increases for the Lidl workforce of 6,100 across the island of Ireland.

It says all employees will get an increase on March 1, with €50,000 allocated to its Laois-based employees across its two stores in Portlaoise and Portarlington.

It says this increase is in addition to the retailer’s commitment to paying the new Living Wage rate of €12.90 as recommended by the Living Wage Technical Group, the first nationwide retailer in Ireland to introduce this back in 2015.

Welcoming the 750 new jobs at Lidl in Ireland, Tánaiste Leo Varadkar said: “Lidl’s decision to hire an additional 750 staff this year is a real vote of confidence in the company’s existing teams here and indeed the retail sector and the Irish economy as a whole. There will be in a variety of roles, catering to a wide range of skills. I’m particularly pleased to see Lidl is awarding a pay increase to staff, meaning they will continue to offer a living wage. Congratulations to the entire Lidl team.“

Commenting on the announcement, Maeve McCleane, Director of Human Resources at Lidl Ireland & Northern Ireland said: “We are delighted to continue to invest in our expansion in the Irish market, and as a result continue to grow our team with 750 new roles.  Lidl has long been an employer of choice and we are pleased to underscore our commitment in maintaining that position with a significant additional €10 million investment in pay increases as well as offering the most competitive and all-encompassing suite of benefits in the jobs market at present.

"Recognising hard work, rewarding success, and celebrating achievements have always been core to Lidl’s People strategy so of course we’re pleased to be in a position to further recognise the commitment and dedication demonstrated by our frontline and supports teams, particularly as an essential business throughout the pandemic.”

Lidl was also recognised as a Top Employer for 2022 for the second year running by the Top Employers Institute.