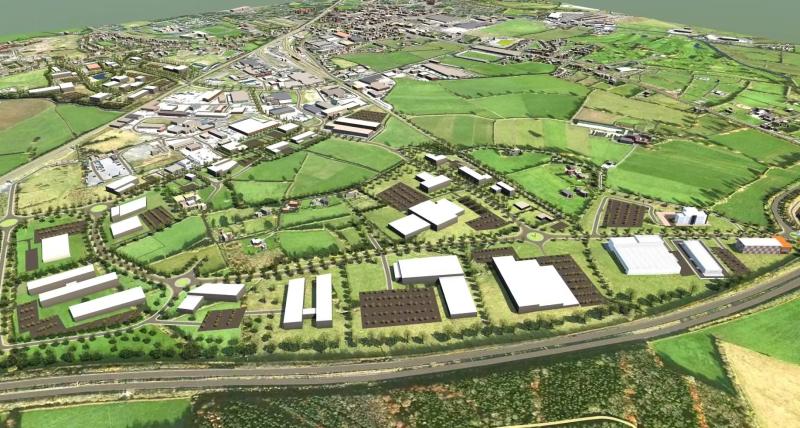 Some sixty new Laois jobs are promised with the €1 million sale of another two industrial sites in Portlaoise by Laois County Council.

The latest two companies to snap up the serviced sites in J17 National Enterprise Park are Allwood Architectural Joinery from Portlaoise, and Zeitgeist Spirits Limited, promising 30 extra jobs each once they build their new plants.

It leaves just one site for sale in the hugely successful J17 park next to the M7 motorway.

Councillors have praised the initiative of Laois County Council for investing €7.2 million to buy the land from Supermac's in 2017 and build a serviced park.

Including the latest deals, seven sites are now sold to different companies with the promise of a total of 420 new Laois jobs. The land sales have made a total of some €3 million so far.

Cllr Thomasina Connell proposed the sale to Zeitgeist, noting that the company plan to create "about 30 jobs" as well as a visitors centre.

"I am really excited for Laois and Portlaoise. This is a golden time in the county, Laois is booming," she said.

"I urge you to keep in mind buying more land out there. From day one of this purchase, this has been a credit to all involved," said Cllr Paschal McEvoy.

"Please provide other areas around the town where we can do the same. I predict that J17 will be more popular than J14 in Monasterevin, because it's on the intersection of the M8 to Cork. A job well done. Pat McDonagh has two sites on the left and right as you drive in, serviced and ready, I ask the chief executive to continue to liaise with him," said Cllr Willie Aird.

"This is another success story for Laois County Council, for local jobs and local people. I ask that you look for more land," Cllr Catherine Fitzgerald said.

Cllr Aidan Mullins praised it as "a marvellous project" and wants the same for his town of Portarlington.

"Portarlington Enterprise Park sites are all sold. I don't believe the council has any other sites in the town. Look at other land banks for a similar development, maybe on a smaller scale," he suggests.

"The rural area hasn't done as well as Portlaoise, it has declined. You have to inject life into rural areas," he said.

Laois shopping centre roof to get 5,000 metres of solar panels

Cllr James Kelly proposed the sale to Allwood, and said that the Laois company is owned by a Mountrath family who intend to grow the company from 50 to 80 employees in the next five years, having outgrown their factory. They will also offer their own internal accredited apprenticeship scheme.

Cllr Aisling Moran requested a full updated cost breakdown of the project, but described it as "a great project".

Cllr Barry Walsh said that the costs must not be looked at in isolation, as future rates and extra jobs must be considered also.