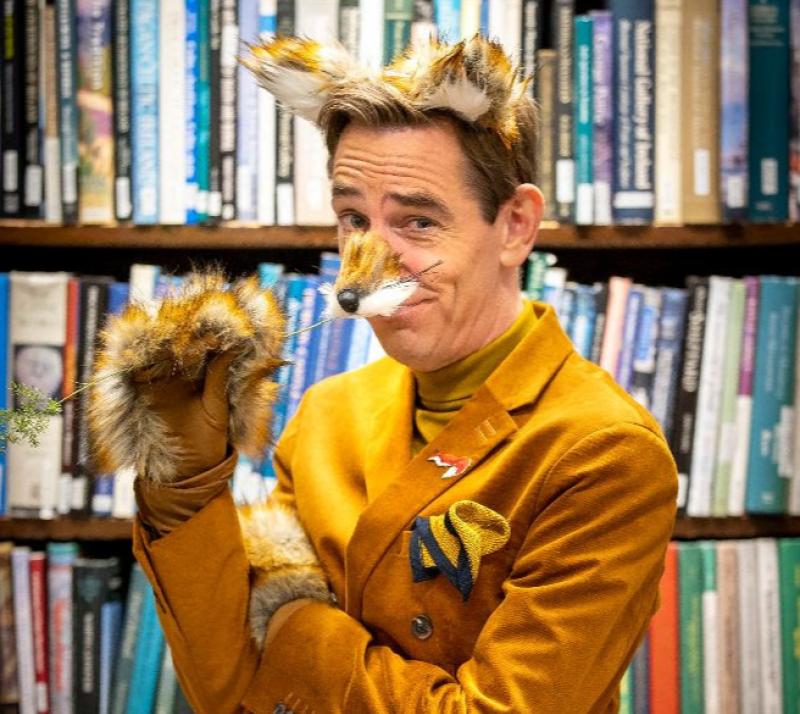 In a year that has seen children and adults across the land seek refuge in books and films, what better theme for this year's Late Late Toy Show than The Wonderful World of Roald Dahl?

The secret is out, and this Friday night presenter Ryan Tubridy will prune his whiskers, brush that tail and lead the charge as the enigmatic Fantastic Mr Fox in a spectacular opening number featuring favourites from the world of Dahl including Matilda, Willy Wonka's Oompa Loompas, and a nod James and the Giant Peach.

The opening number, some of which was filmed at The Library of the Royal Irish Academy against the beautiful and fitting backdrop of endless shelves of books, will then be bouncing over to Ryan and dancers live in studio this Friday night to kick off the biggest night of the Irish television year. Favourites from the worlds of Roald Dahl including Veruca Salt, grasshoppers, The Twits, Miss Trunchbull, Charlie and Grandpa Joe, as well as Mrs Fox, the little foxes, and Badger from Fantastic Mr Fox, will join Ryan for the opening spectacular. The song they will be performing will remain a surprise until the show airs on Friday night!

Ryan Tubridy is a big fan of Roald Dahl.

"This has been a year like no other, and therefore requires an opening like no other. The Wonderful World of Roald Dahl is one that understands children in a way that no one else ever has. He knew that there could be a sadness to the world at times, but that there's also great love and mischief and fun to be found. All of those factors have been combined to bring what we hope is a joyful, beautiful, and wonderful opening like no other to this year's Late Late Toy Show.

"This is the dream theme for a bookish person like me, I've been talking about my love of reading since I was a little boy.
I love Fantastic Mr Fox and I'm rather enjoying being a fox for this opening because it's so different from what has gone before. What we have in store really captures The Wonderful World of Roald Dahl... everybody is welcome, it's going to be a night of nights in a year of years."

The show will feature not one, but two musical performance from Ryan, with the second taking place mid-show on Friday night. There is also a new international element to the show, with a selection of talented children from around the world joining together for a special one-off performance. They will be accompanied by a very special guest singer. In a year where not everyone can be together for Christmas, the children have sent in videos from around the world as messages to their family back in Ireland.

This year's magical Dahl inspired set was created by the RTÉ production Design Department, led by Marcella Power. RTÉ's Costume and Make-Up departments, with costume led by Brigette Horan, have also been busily prepping the cast ahead of Friday's extravaganza. Dancers on this year's Late Late Toy Show come from Spotlight Stage School, with choreography on the show from Stuart O'Connor.

Traditionally, sick children from LauraLynn, The Jack & Jill Children's Foundation, CHI at Temple Street and CHI at Crumlin would be invited to come and visit The Late Late Toy Show set for what was always a magical afternoon in RTÉ. This year, as Covid restrictions have prevented this from happening, some children from Crumlin, Temple Street, Jack & Jill and LauraLynn have been asked to take part in a special performance on the show, filmed remotely, so that they can still play a very special role in the evening.

RTÉ say toys have kindly been sent in from toy retailers all around the country, and the toys demoed by children on The Late Late Toy Show will be donated to charities across the country in time for Christmas.

You can watch the show on the RTÉ Player wherever you are in the world. Last year, RTÉ say that Irish people from over 100 countries tuned in to watch including from Estonia, Kuwait, and Honduras. This year, RTÉ Player and the RTÉ News channel will simultaneously broadcast live in Irish Sign Language (ISL)with ISL interpreters Amanda Coogan and Aisling Dragoi signing the live show from RTÉ Studio 6. An AD (Audio Description) version of The Late Late Toy Show will also be broadcast on RTÉ One on Monday 30th November and available on-demand on RTÉ Player.

On social media RTÉ says here will be bringing you the best bits from the Toy Shows of Christmas past as well as teasing Friday night's show with behind-the-scenes content and an exclusive sneak-peak of this year's set. We follow Ryan's journey as he prepares for the biggest night of the year. Throughout the night, RTÉ's social team will post backstage updates and the biggest moments from the show on Facebook, Instagram and Twitter. To join in the fun follow #LateLateToyShow, @LateLateRTE on Instagram, @RTELateLateShow on Twitter, @TheLateLateShow on Facebook.

A list of the toys featured will be available on the show website www.rte.ie/lifestyle following broadcast.  As a warm-up for the main event, The Late Late Toy Show Singalong will air on RTÉ One at 7pm on Friday.

- During filming and photography for The Late Late Toy Show, RTÉ has been and will be adhering to public health and safety guidelines in relation to Covid-19.