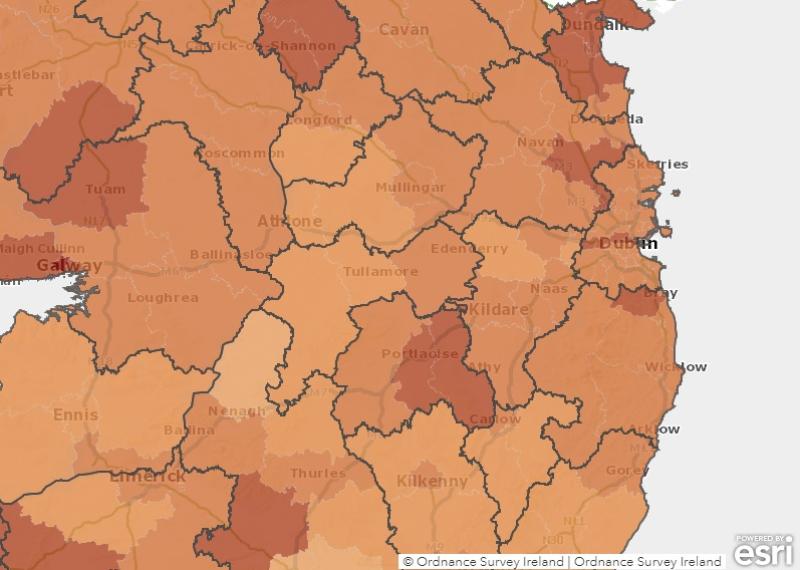 Laois has had one of the highest recorded incidence rates of Covid-19 in Ireland through July with the county worse of than any other midlands and most Leinster counties as the Delta wave swept through unchecked.

While there are signs the situation is improving in August, the second half of July saw some 400 cases identified in Laois with the most densely parts of the county worst hit. Rural areas have not escaped.

The latest Local Electoral Area (LEA) figures as published on August 5 on the Covid-19 Ireland data hub breakdown covers the period from July 20 to August 2.

The rapid worsening of the situation in the Portlaoise area is revealed when contrasted with earlier in July. Figures show that there there were 58 new cases in the district between July 13 and 26 when the LEA incidence rate was  182.4 per 100,000 population.

The latest figures from the Portarlington Graiguecullen LEA show it has the highest incidence in Laois but the situation has improved a little on the previous reporting period.

The improvement is found when compared to the two weeks previous. There were 178 new cases in the area in the 14 days to July 26. This gave an LEA rate per 100k of 633.5 one of the worst in Ireland at the time.

The population in this LEA is 28,096. Apart from the two big towns, it includes Stradbally, the home of the Electric Picnic which has been refused a licence due to Covid-19.

Other communites in the district include Timahoe, Ballylinan, Ballyadams, Killeshin, Crettyard, Killenard, Ballybrittas. It borders Kildare, Carlow, Kilkenny and Offaly. MORE BELOW LINK.

The situation has improved marginally in the largely rural Mountmellick / Borris-in-Ossory LEA.

The rapid spread of Covid-19 in Laois is best reflected in this area when the figures at the end of June are examined.

The district is less populated than the others however Mountmellick is close to Portlaoise. With 24,807 people it includes Rathdowney, Mountrath, Durrow, Castletown, Camross, Errill, Clonaslee and Rosenallis. It borders Tipperary, Offaly and Kilkenny.

Health Protection Surveillance Centre figures up to August 2 revealed that while the incidence remained high, the situation in Laois is improving.

HPSC figures up to August 3 show that there were 372 cases in Laois in the previous 14 days, giving a two week incidence rate of 439.2 per 100k. Just over 38%, or 143 of these were spotted in the previous seven days, which included the August Bank Holiday weekend. The seven day incidence to August 3 had fallen to 168.8 per 100 k.

At one stage during July, Laois had the second highest incidence of the disease in Ireland. The county has now improved to the 14th highest.

Vaccination accelerated in Laois during the last week of July with teenagers getting the jab and walk-in clinics operating at the vaccination hub in Portlaoise. July also saw the highest number of vaccines administered at the Laois hub for any month since it opened in April.

Remarkably, Offaly has the lowest incidence on August 3 as the Dealta virus swept Ireland. It had the highest level of the disease for several weeks during the deadly third wave in early 2021.

NPEHT reported that as of midnight, Wednesday 4 August, there were 1,491 new confirmed cases of COVID-19. As of 8am Wednesday, 193 COVID-19 patients are hospitalised, of which 28 are in ICU.

“Vaccination offers a real way out of this pandemic. The positive news is that take-up in Ireland is extremely high, which shows people understand the benefits for themselves and for their communities of getting vaccinated. Those with at least a first dose in the over 40s is over 90%, in the over 30s it is 84%, in the 18 to 29 year age group it is over 73%, and in the 16-17 year age group, it is over 46%. These figures continue to increase, and each person who has come forward should be commended.

“It’s understandable that after the period of time that COVID-19 has been with us, that some people become tired of it. But the virus does not become tired. It doesn’t care if we are fed up, it only sees the opportunity to spread from person to person when we let our guard down". More below link.

“Risk assess your plans this weekend. Remember that if you have any cold or flu like symptoms at all, you should err on the side of caution and stay at home - do not meet up with others, and do not go to work. If you are an employer, remind your employees to continue working from home where possible for now, and not to attend work with any COVID-19 symptoms. Vaccines work, but they must also be supported by us all choosing to act as safely as possible,” concluded Dr Holohan.