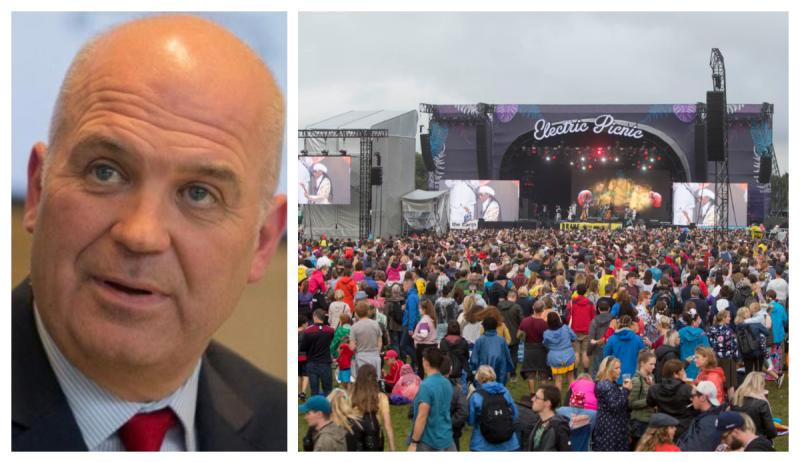 The notion that the Electric Picnic could ever go ahead in a pandemic always seemed far fetched but should it have been left up to Laois County Council to short circuit the event?

There are all sorts of rumours flying around the insurance was the reason why Festival Republic applied for a licence to hold an event in the knowledge that compensation would only be paid out if the decision was taken out of their hands.

That's fair enough but for the fact that this is not some half-baked event. It is a business that makes millions of euro for the promoters and provides an income for many artists and people in the music industry.

After a lean Covid-19 hit year and a half, they would have wanted to hold a festival to balance the books.

If there was never an intention to hold the event, why would they bother rescheduling to the end of the September?

The promoters have also lobbied the Government hard. Letters were sent to the Taoiseach, Tánaiste and other Ministers making a strong case. Melvin Benn, the face of the Picnic, took to RTÉ to explain how it could happen safely.

All of this points to a conclusion that the promoters fully intended to proceed and were not just looking to recoup their costs through some sort of an insurance claim.

Now, you could argue that the promoters should not have even considered organising a huge festival in the middle of a pandemic when infections are still high and vaccination is incomplete. But there has to be respect for the fact that this is their business.

We must also acknowledged that there was no specific clarity around what they could and couldn't do.

Which brings us to the point that it should not have even got to the point of a local authority faced with the responsiblity of refusing the licence to an event which is valued on many fronts in Laois.

Government and health authorities should have been crystal clear in the spring time about the holding of big events in Ireland such as the Picnic.

The organisers of the National Ploughing Championships pulled the plug on the national event which was due to take place in Ratheniska, Co Laois at the end of September. They did this of their own accord. Other events such as the Tullamore Show also cancelled in the abscence of clear direction.

Laois County Council approached the HSE for advice on what to do. Surely the HSE, NPHET and Government should have been proactive in giving the council guidance.

But the silence was deafening. The void was filled by the Electric Picnic promoters taking to the airwaves to lobby and push for the event. In fairness, they probably did this to seek clarity.

The nearest we came to getting some insight into what the powers that be thought was the comment in Portlaoise in late July from the Minister for Health Stephen Donnelly that the event was 'not likely' to happen.

There was a sense in the press coverage that there was division among Ministers over whether or not such a big event could take place. But nobody, other than Minister Donnelly, wanted to be the good guy or bad guy publicly and announce support or opposition to the Picnic.

Then at the end of July the Government said 40,000 people could go to Croke Park for All-Ireland finals.

A year and half into the pandemic, the bungling in some aspects of the management of the disease is apparent again. It again leads one to the conclusion that, when the story of this virus is written, it will be the general public and the frontline who should take the lion's share of the credit for overcoming the disease.

Apart from Laois County Council, it seems apparent that in all of this the views of local people in Stradbally were not given much of an ear. Many were steadfast against an event that they have supported for more than a decade but neither promoters or or national politicians or health advisors paid them much heed.