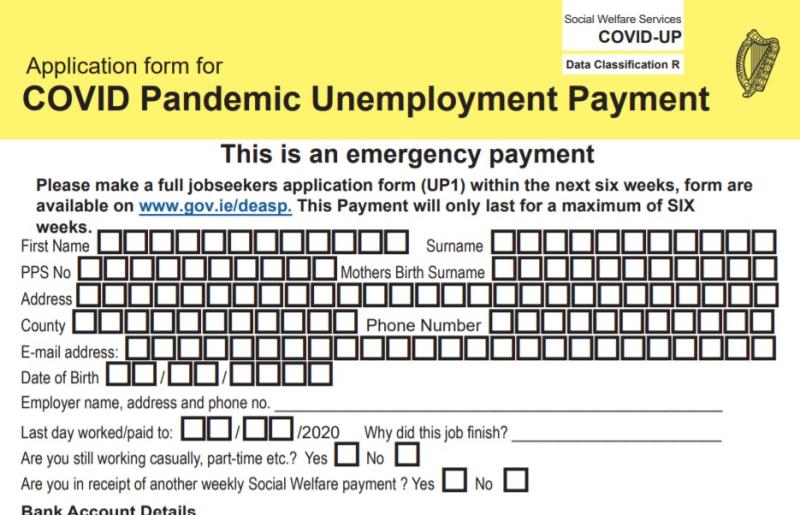 Nearly 4,000 people in Laois and Offaly are facing big income drops when the Pandemic Unemployment Payment (PUP) is cut according to Sinn Féin TD Brian Stanley.

The Laois Offaly representative warns that new figures reveal the large numbers of people in Laois and Offaly are still depending on the PUP and will see their incomes plummet due to upcoming cuts planned by the government. He wants these cuts cancelled.

He said new figures published by the Department of Social Protection reveal that 3,908  people in Laois and Offaly are still receiving the PUP which closed to new entrants in early July.

While he said this is a massive drop from May last year when 18,767 were in receipt of the payment in the tow counties, he insisted that the many people are still out of work.

“It is clear that the pandemic is not over. New figures have revealed that 2,088 people in Laois and 1,820 people in Offaly are still receiving the PUP, as many workers are still unable to return to work as their sectors remain closed under public health restrictions. Despite this, the government is insisting on ploughing ahead with planned cuts to the PUP.

"The cuts to the PUP and the plan to transition people from the PUP to Jobseekers must be scrapped. These cuts are punishing people who cannot return to work and will hit young workers hardest.

"For many workers, their PUP will be slashed by €50 per week. For others, their income will plummet even further if they are transitioned to the Jobseeker's rate. MORE BELOW LINK.

The county has one of the lowest incidences of the disease

“This will particularly affect workers aged 18-24, as the maximum Jobseekers they can receive is capped at €112.70 per week. As Jobseeker’s Allowance is means tested based on entire household income, young people living at home will receive even less.

"The government’s planned cuts are a slap in the face for those who are employed in sectors that have not yet been given a date for re-opening. While workers are prevented from going to work due to public health restrictions, they should continue to receive the financial supports they need. This government has badly let down the live entertainment sector, by failing to engage with the industry and be upfront about the sector’s future. Workers in this industry must not be punished because their sectors remain closed," he said.

The Laois based TD said Minister Heather Humphreys and Minister Leo Varadkar continue to be silent on this issue.

"They are refusing to be upfront with workers about why they are insisting on continuing with these ill-timed cuts. The Government owe it to the many workers here in Laois/Offaly who are affected to be upfront about what they are doing and why,’’ he said.

The TD reiterated his call to call off the PUP cuts

“I am again demanding that the government urgently cancel the cuts to the PUP that they are planning to implement. Workers in Laois/Offaly and across Ireland must not be unfairly punished by this government while their sectors remain closed.

"While we are aware the PUP cannot continue forever, the best way forward is to review it quarterly, and in the meantime try to get as many workers as possible back into employment," he said.

EXPLAINER: Covid-19 restrictions EASING in September and the key DATES?