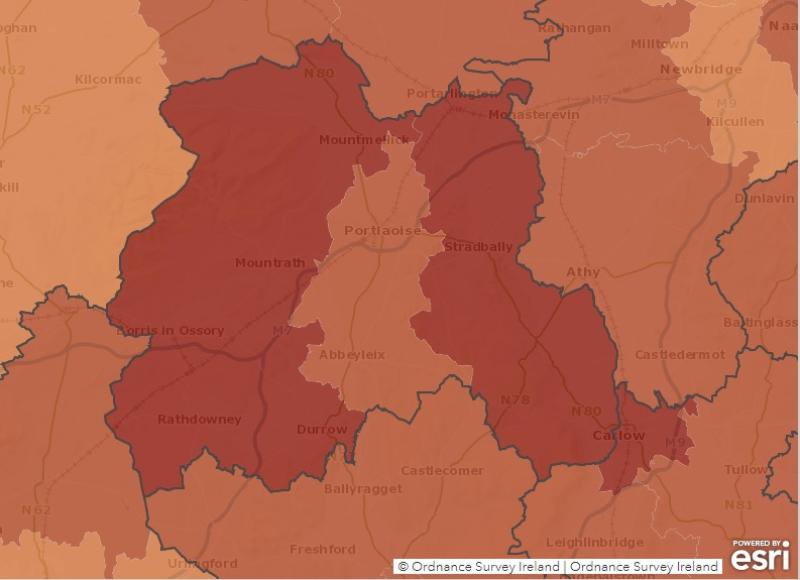 The incidence of Covid-19 in Laois is showing no signs of slowing with rate of infection highest around Portarlington and Graiguecullen while the situation in and around Portlaoise has worsened sharply.

The latest Local Electoral Area (LEA) figures, published on November 4 shows the virus spread between October 19 and November 1. The Covid-19 Ireland data hub. figures, which are based on health service confirmed positive tests, show that the level of infection in all three Laois municipal districts is higher than the national average.

The Borris-in-Ossory / Mountmellick Municipal District continues to have a very high coronavirus incidence but the situation has improved in the past week.

The figures show that there were 273 new cases in the Portlaoise area to November 1. This gives an incidence of 858.7 per 100,000 people. The national incidence was 695 per 100 k. The Portlaoise incidence rose above the national average since the previous analysis period.

The latest figures from the Portarlington Graiguecullen LEA reveal that it is now the worst hit part of the county. There were 293 new cases in the 14 days to November 1. This gave an incidence of 1042.9 cases per 100k.

The situation has eased in the Mountmellick / Borris-in-Ossory LEA but it continues to have one of the worst levels in Ireland with hundreds of new cases identified.

Despite being the least densely populated part of Laois which should mean a lower incidence, there were 243 new cases in in the fortnight to November 1 giving an incidence of 979.6 per 100k.

The situation has improved compared to the two weeks to October 24 when 303 new cases led to an incidence of 1221.4 per 100k of the population - double the national average at the time.

Just over 56% of new Covid-19 infections occurred in the week to November 2 according to the HPSC figures.

The Laois seven and 14 day incidences are above the national averages. There are 54 new cases a day on average over five days in Laois.

The HPSC report also shows that Laois has the seventh worst record of Covid-19 containment in the 26 counties.