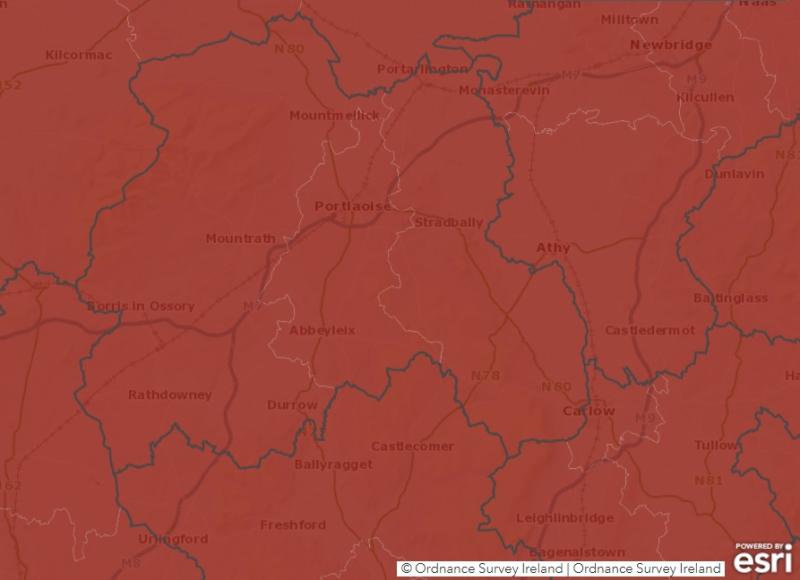 Any notion that Covid-19 is coming under control in Laois is dashed by the latest official figures which reveal Portlaoise is one of the country's hotspots while the other two electoral areas of Laois also have growing incidences of the virus.

The Postlaoise area incidence has risen sharply in the past week while virus spread is also above average in the Graiguecullen Portarlington Municipal District. The Borris-in-Ossory Mountmellick area is below average but the incidence has gone up.

Up to date data shows that Laois has the third incidence of Covid-19 in Ireland with 100 cases a day being detected via PCR testing in the county.

The incidence has risen sharply in the town and surrounds to 1865.1 per 100,000 per population. This level of infection puts Portlaoise among one of the most likely places in the country to catch the virus. Some districts have incidences above the 2,000 per 100 k mark.

A measure of how bad things have got in Portlaoise can be found in the average incidence of all LEAs in Ireland. It is 1,355.1 per 100 k.

The incidence has shot up again in the Mountmellick / Borris-in-Ossory LEA which, nevertheless, continues to have the best rate in the county.

There were 250 new cases in the fortnight to December 6. This gave an incidence of 1007.8 per 100k reversing the slowing of spread in recent weeks.

The Health Protection Surveillance Centre (HPSC) tracks the spread of the disease on a daily basis for NPHET. The latest figures it publishes show that the Laois county situation has worsened again.

Laois has the third highest rate of the virus of any county in Ireland in the two weeks to December 7. It shows that 1310 people tested positive for Covid-19 in the two weeks analysed giving an incidence rate of 1546.7 per 100k.

On average, nearly 100 people a day tested positive in Laois between December 3 and 7.

Both the Laois seven day and 14 day incidences are above national averages.