Portlaoise continues to have one of the highest incidences in Ireland 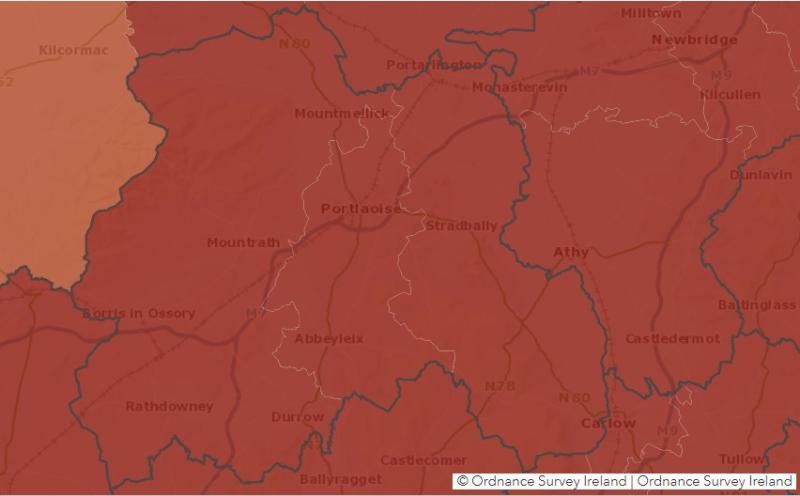 The incidence of Covid-19 has dipped in Laois in the past seven days due in party to slowing in Portlaoise which, nevertheless, continues to have one of the highest incidence in the country.

Portlaoise had the second highest incidence of the virus in Ireland according to the weekly pandemic breakdown of the disease incidence in local areas around the country in the two weeks to December 13.

The latest Local Electoral Area (LEA) figures published on December 23 show the virus incidence and new infections from December 7 to 20.

The Portlaoise area incidence decrease is also matched by falls in the Graiguecullen / Portarlington Municipal District and the Borris-in-Ossory / Mountmellick area. Only Portlaoise now has a higher incidence of the disease than the national average 1,344.3 per 100,000 population.

The Covid-19 Ireland data hub figures, which are based on health service confirmed positive tests, show 577 new cases to December 20. This is down from 665 new cases in the Portlaoise LEA in the 14 days to December 13.

The electoral area continues to have one of the worst incidences in the country though there is an improvement from the first two weeks of December.

The latest figures from the Portarlington Graiguecullen LEA reveal also reveal a decreasing incidence. There were 372 new cases in the two weeks to December 20 giving an incidence of 1324 per 100k population.

The incidence has also gone down in the Mountmellick / Borris-in-Ossory LEA. There were two 257 new cases in the district in the 14 days measured. This produced an incidence of 1036 per 100 k.

It's an improvement on the two weeks to December 13 when there were two 279 new cases in the district which produced an incidence of 1124.7 per 100 k.

The Health Protection Surveillance Centre (HPSC) tracks the spread of the disease on a daily basis for NPHET. Latest figures show that Laois is one of the few counties were less than half of the new cases confirmed in the past two weeks merged in the past seven days.

There were 545 new cases in the past seven days which is nearly 49% of the two week total to midnight December 21 of 1,115. An average of 75 new cases are being detected every day in Laois.

Laois now has the eleventh highest incidence of the disease in the country in the HPSC county by county table.