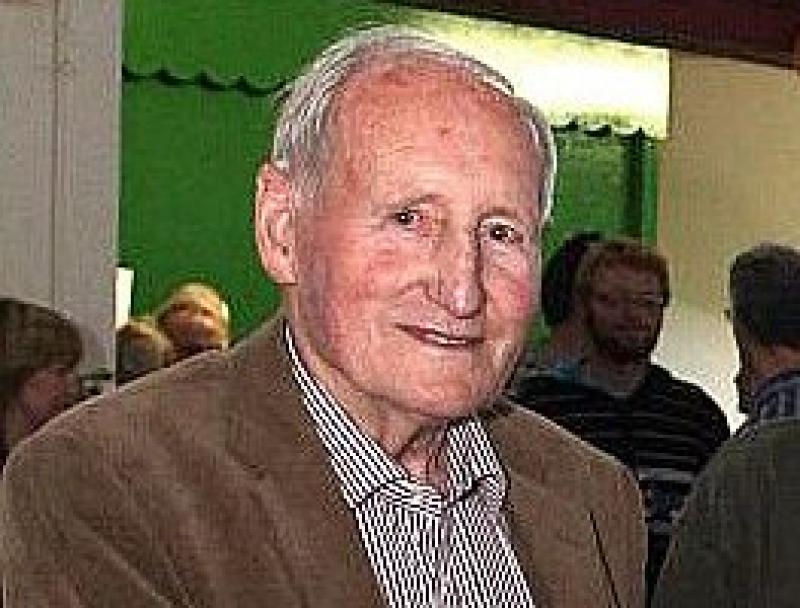 The death on Monday, May 2 of Sean Ramsbottom brought sadness across the entire County of Laois where Sean was known far and wide as were his offspring because of their involvement in GAA and football.

Though living in the football heartland, Sean had a great love of hurling and hurling people.

While he saw much success in his capacity as County Chairman I think one of his proudest occasions was back in the first year of the 2000, the year his son Willie led the Round Tower club to victory in the intermediate football championship beating the neighbors from Annanough.

While it was a big occasion it was another event that year that brought more joy to Sean and that was the winning of the Junior hurling championship and Andy Bergin bringing the Fr Phelan cup to “Red Square.” Timahoe first entered the hurling championship back in 1964 and had lost eight finals before they eventually got their reward twenty two years ago.

There were other big occasions and a year later there were big Timahoe connections when Laois ladies were crowned All-Ireland champions in Croke Park, no less than thirteen of the panel were Timahoe club members.

Go back 40 years and another proud occasion when Parish reached a first under twenty-one in ten years and the captain was his son John. After a struggle they overcame Ballyroan and Sean had the proud distinction of presenting the Cup to his son.

As a player he was on the successful intermediate team in 1962 and played in the senior final three years later. In 1973 in his first year as chairman he flew out to London after Laois were crowned All-Ireland junior champions at home but played London at New Eltham and Eamon Whelan was the captain. On the team was Timahoe man Tim Clancy, a great start to Sean’s career in the chair.

The year 1977 saw the hurlers win All-Ireland B title and again in 1979. In 1981 Laois footballers contested the Leinster final against Offaly and later flew out to America on a whistle stop tour of the major cities. Earlier that year Laois hurlers played Offaly in the National league semi-final in Nowlan Park in front of 25,000 supporters and lost by a point.

Sean was in Cloughjordan when Portlaoise were crowned All-Ireland club champions in 1983 and in the Centenary Laois hurlers contested the Centenary final.

1985 was another unique year for Sean as chairman. On July 21st the hurlers played Offaly in a first hurling final since 1951 and, a week later, the footballers lost the final to Dublin by six points.

A year later was a proud day for all Laois people, having beaten Down and Dublin they faced the league holders Monaghan and, in dramatic circumstances, they bridged a gap of 60 years.

Sean retired in 1987 but he still maintained his great love of sport and saw Timahoe contest the senior final in 1988. He was thrilled at the great minor achievements of the 1990s and himself and his wife Brid seldom missed big occasions in Croke Park.

Maybe on one of his last big days on Jones road not one but two Timahoe men were captains. His grandson John captained the minors to victory over neighbors Carlow and, in the senior final, Padraig Clancy, grandson of Jim Sayers led the seniors out against Dublin.

Sean had a thousand memories of great and not so great days in Pairc Mochua, Bill Delaney Park, Dr Cullen Park and Croke Park but perhaps, like many Timahoe men of his time, he would never forget O’Moore Park on October 5th, 1969, when Timahoe beat Portlaoise in the Laois senior football final for the first and only time.

The captain that day was Tom Joe Bradley.

Sean had been unwell for a while but remained positive right to the end and last Tuesday large crowds came to pay their respects to a man who loved meeting people, be they young or old.

On Wednesday May 4th the cortege made its way to the Parish Church for his requiem Mass and the celebrant paid tribute to a great parishioner and a man who loved the land he lived upon and a great family man who will be greatly missed by all who knew him.

Afterwards as the sun shone brightly Sean was taken to St Michael's cemetery for interment.

Timahoe club formed a guard of honor as the remains arrived at the Church and again they flanked the Hearse as it made its way to the cemetery and the coffin was draped in the local colours.