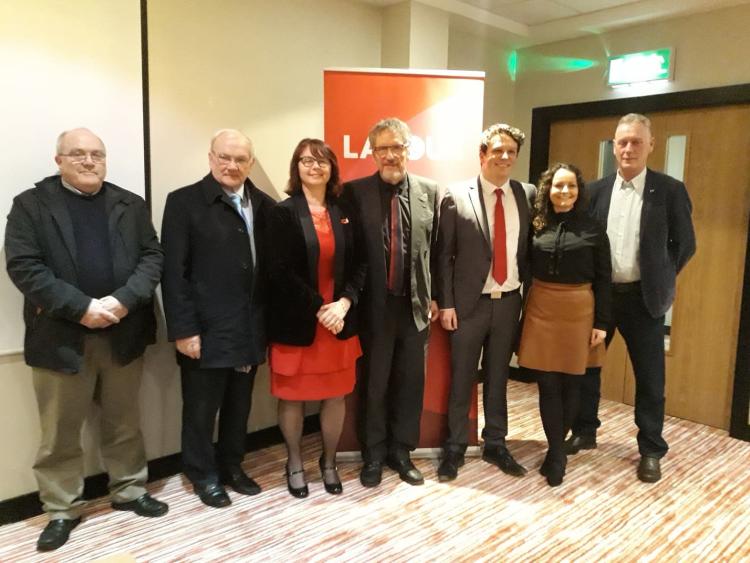 Cllr Tuohy spoke of the importance of local government and the people coming into politics through working in their own communities.  His spoke of his history of local campaigning, for over 30 years to keep the Midland Regional Hospital in Portlaoise open and his ongoing work to improve the schools in Laois.

Cllr Touhy said the most important issue to him was the devastating impact that suicide has had throughout Ireland and the importance of improving local mental health services.

Eoin Barry, highlighted the importance of the Labour Party holding the event on the Laois- Carlow border. He spoke of the lack of political representation that the area has had for many years.

Mr Barry said that in his campaign he would highlight the contribution that volunteers make in their communities. He noted that the Portarlington St Patricks Day parade would not go ahead this year as they didn’t have enough people to organise it and he commended the work of small numbers of volunteers that keep clubs and events running around the county.

Mr Barry also spoke of the importance of local business and the need to reduce the incredible number of people that commute out of Laois each.

He said that local government can play a key role in protecting the environment.

The meeting was attended by Labour Party members with former TD Michael McNamara who is seeking the Labour Nomination for the Europe South Election in attendance. Labours General Election Candidate Mark Wall for the new expanded Kildare South constituency that now covers Portarlington was in attendance as was former TD Jack Wall and Cllr Aoife Breslin of Athy.