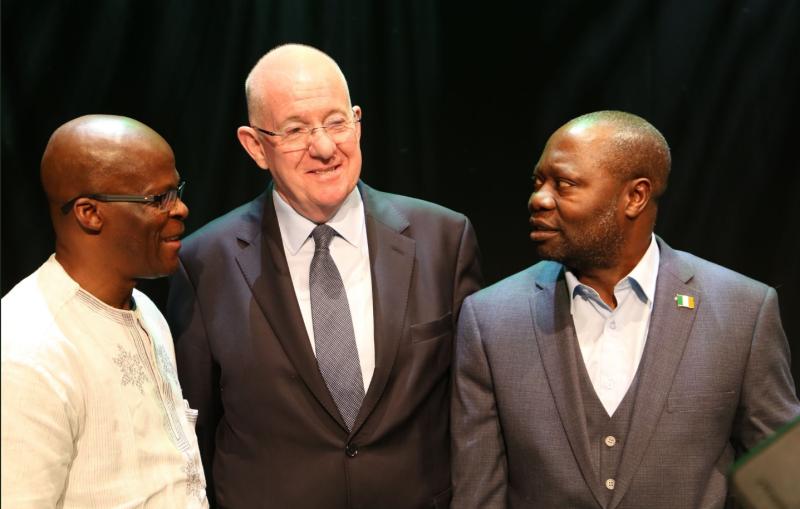 The Minister for Justice Flanagan met with Rotimi and congratulated Timothy on being one of the new Irish passport holders to originate from over 90 countries.

Speaking afterwards to the Leinster Express Mr Adebari, who was an independent councillor, said it was 'unlikely' that he would contest the 2019 local elections.

The Nigerian native first ran for a council seat in Portlaoise in 2004 when he was elected to Portlaoise Town Council. He also contested the 2011 General Election. He became Portlaoise Mayor in 2007. He lost his seat on Laois County Council in 2014.

“Today, you will take an oath of fidelity to our nation and loyalty to our State. You will do so in the knowledge that this relatively young State – still less than a century since our independence was gained – is a place of culture where traditions are cherished and history is ever-present.  And be sure, too, that this State is a place of diversity and openness,” he said.


The Minister highlighted the Government’s Migrant Integration Strategy. He said it aims to ensure that barriers to full participation in Irish society are identified and addressed and that the basic values of Irish society are respected by all.

“The people of Ireland are committed to respecting all traditions on this island equally. Our Migrant Integration Strategy is about building a society where we all live in harmony while at the same time respecting our cultural or religious differences.

Citizenship ceremonies were first introduced in 2011 in order to mark the occasion of the granting of citizenship in a dignified and solemn manner. Today’s ceremonies bring the total number of ceremonies held since then to 141 where people from over 180 countries will have received their certificates of naturalisation.

Including minors, over 122,000 people will have received Irish citizenship since 2011 following the ceremonies.

Top ten nationalities for Citizenship Ceremonies in Killarney are as follows: