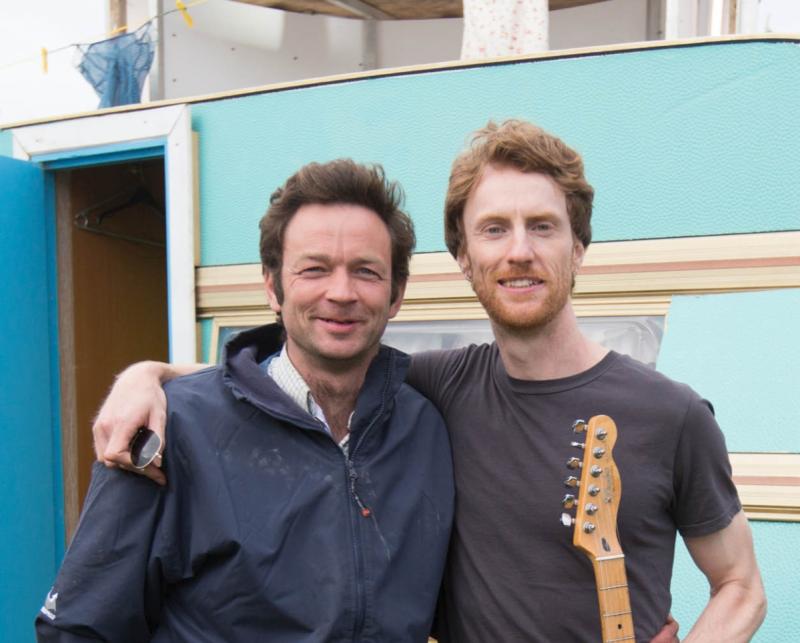 Thomas Cosby, left, with his cousin Phil Cosby who played with his band The Holler at Electric Picnic in 2015. Picture: Alf Harvey/HRPhoto.ie

The refusal to grant a licence to allow 70,000 people attend the Electric Picnic is "regressive" according to the owner of the Laois site which hosts the event who also believes Irish people are 'running around like sheep' rather than getting on with living life with the virus.

Tom Cosby is a member of the Cosby family which owns the estate in Stradbally that has hosted the festival since it was first staged in 2004.

Speaking to the Leinster Express he was clearly annoyed at the local authority in Laois for halting the festival this year by refusing to grant a licence for the event at Cosby Hall. He is also frustrated by the national approach to managing the virus which he believes has not helped.

"The decision by Laois County Council is unhelpful and that would be the kindest way of putting it," he said.

As to whether this meant he was disappointed he was forthright in is opinion.

"It's a very regressive decision. It shows absolutely no foresight whatsoever. I cannot see why they could not have given a conditional licence based on Government policy (on Covid-19) at the time of the event. It would have made far more sense," he said.

He was critical of decision to abide by the letter of licencing laws designed for normal times. He insisted that compromise must be reached in the middle of pandemic. He accused the decision makers of "hiding behind" the event legislation rather than finding a middle ground.

"There has to be flexibility. Everything has been inflexible in the last 18 months and we have to do things differently," he said.

Mr Cosby said there would have been huge benefits to be gained from allowing it to proceed.

"Locally, nationally, internationally - there is a huge downstream effect. It is not just a monetary value such as people working on it but also a social value of people enjoying themselves," he said.

He said work had commenced on preparing the site for 2021 in the same way as Festival Republic and other big event organisers are holding events around the world as countries emerge from the pandemic.

"They are putting these events on with very strict conditions. It is work in England, Europe and America. There is no reason at all why it can't work here," he said.

Instead he said Irish authorities have been giving out 'mixed signals'. He said the Minister For Arts Cathryn Martyn had been trying to make some progress but had been 'blackballed' out of the decision making on big events.

"I don't know what's going on. Early in the pandemic people (in power) were making decisions. Now everyone is terrified of their shadows of making decisions...There is a massive lack of coherence," he said.

He said he would like to see the correspondence received by Laois County Council from health authorities including NPHET about the basis for reaching a decision.

Asked about local resistance in Stradbally to the event, Mr Cosby believe it was minimal.

"There were one or two voices against it. People are going to have concerns," he said.

He added that he had met English people on holiday whose views showed him how out of step the position of Ireland is in the management of the virus.

"We are running around like sheep whereas every other country is being much more progressive in realising that we can get on with life if we are just sensible such as wearing masks indoors. They (other nationalities) are not be complacement - they are just being sensible. We instead seem terrified to take the next move," he said.

Mr Cosby said the event would not happen this year.

"Blame can be assigned all around but it is just incredibly disappointing that nobody can make decision that takes into account a changing situation," he said.

As to the future and 2022, Mr Cosby said a rolling contract in place with Festival Republic to stage the event in Laois. While he did not believe the handling of the licence application will not sour the relationship with Laois that could lead to a move elsewhere, he said what has gone on 'does not help'.

"By this time next year hopefully things will have calmed down," he concluded.

Electric Picnic was postponed in 2020 due to the pandemic. Plans drawn up for 2021 would have seen the biggest edition of the festival taking place to date with 70,000 scheduled to attend from September 24 to 26.