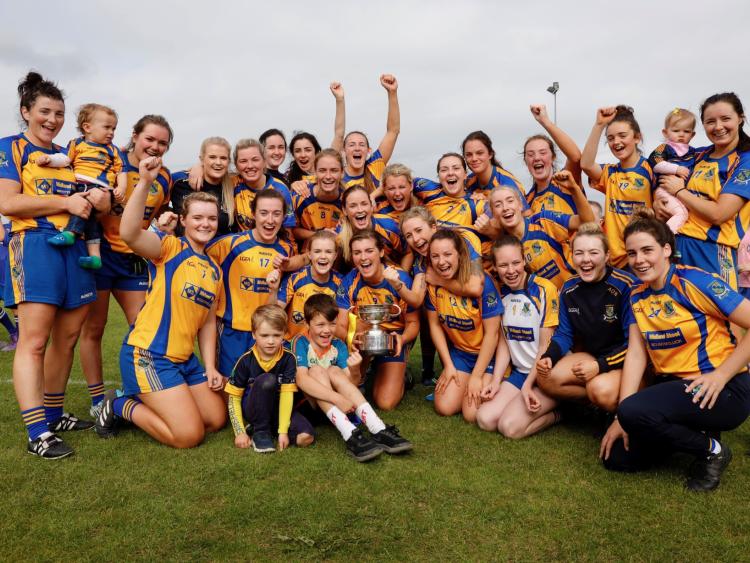 Despite a courageous first-half performance from Timahoe, with Mo Nerney causing Sarsfields all sorts of problems,they were unable to maintain that level in the second-half, and Sarsfields ran riot to claim the championship once more.

Joyce Dunne, who would go on to dominate midfield for Sarsfields, set up the first score of the game after strong running. Meaghan Dunne ran off her shoulder and sent over the opening point.

The underdogs Timahoe were out of the blocks quicker though, with Mo Nerney nailing three points in succession, scoring two from play and one from a free, while Orla Hennessy also got her name on the scoresheet.

Aileen O'Loughlin of Sarsfields swapped a converted free with Alice Dunne of Timahoe, before Sarsfields went back in front.

O'Loughlin landed one over off her left boot, and then the first goal of the game went Sarsfields' way.

Corner-forward O'Loughlin was again involved, as she did very well to claim a Timahoe kick-out. O'Loughlin found Meaghan Dunne who picked out the run of Leah Tarpey, and she buried it into the net.

O'Loughlin converted a free for Sarsfields to extend their lead out to two points, but Timahoe replied well.

Nerney added two more points to her tally, one from play and one from a free. Although Sarsfields hit back through Meaghan Dunne and Lorna O'Sullivan, Nerney struck again.

Jenny Murphy and Alice Dunne were both involved in a move that culminated with Nerney finishing the ball brilliantly into the bottom right corner of the net.

Timahoe's tails were up now, and Orla Hennessy raced through to send Timahoe two up. Sarsfields seized the last score of the half through O'Loughlin (free),but they trailed 1-7 to 1-8 at half-time.

However, two minutes after the break Timahoe's advantage was overturned. While Leah Tarpey's attempt was well stopped by Claire Daly in the Timahoe net, Joyce Dunne was on hand to fire home the rebound for Sarsfields.

Sarsfield went further ahead when Mary Keating intercepted a pass out of the Timahie defence, handpassed to Mags McEvoy, and she was fouled. O'Loughlin's accuracy from dead ball situations was unerring, as she converted another free.

Lorna O'Sullivan supplied her second and third points of the day for Sarsfields, as the champions had now managed to turn a deficit at half-time into a five point lead.

Unsurprisingly, it was Nerney who scored Timahoe's opening point of the second-half, but Mags McEvoy cancelled that down the other end for Sarsfields.

Sarsfields were looking to shut this game down swiftly, and they struck for goal number three shortly after.

O'Loughlin picked out substitute Lauramarie Maher near the square, and she poked a beauty into the top right of the Timahoe goals, giving keeper Claire Daly no chance.

Maher fired in a quick-fire second shortly after, as she raced through and crashed anothe into the back of the net for Sarsfields.

The Sarsfields sharpshooter was doing all the damage now, as Maher kicked two more points to leave the difference at thirteen.

Nerney tapped over a free to get Timahoe back on the scoreboard, but that would be the last score of the contest, as Sarsfields celebrated seven heaven.