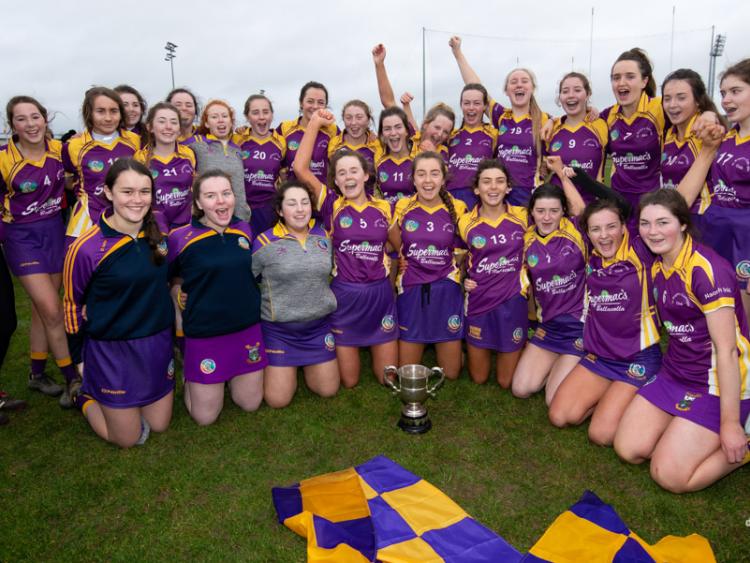 St Brigid’s comprehensively saw off Camross with eight points to spare as they claimed the Laois Minor ‘A’ camogie title in the LOETB Centre of Excellence today.

Before this clash, Camross had come out on top in U-12, U-14 and U-16 games with St Brigid’s. However, St Brigid’s managed to exact revenge after a fine victory saw them en route to a seven point victory in the Centre of Excellence in Portlaoise.

Camross sharpshooter Kirsten Keenan opened the scoring after she latched on to a ball from Aine Cuddy and struck over the first point. Camross were on the front foot from the outset, but they hit three wides during the opening stages and that would come back to bite them.

Jessie Quinlan levelled for St Brigid’s through a converted placed ball, but Kirsten Keenan responded with a splendid free of her own from out near the Camross bench.

St Brigid’s took control from here though, as they held Camross scoreless for the remainder of the half and added on five points to their name to go in with a four point advantage.

A bursting run from corner-forward Tiegan Bowe began the onslaught, and Bowe swiftly doubled her tally after nice play from Clodagh Tynan and Gemma Hoare. Zoe Daly then set up the other St Brigid’s corner-forward, Cathy Galbraith, who fired over from close-range.

Galbraith launched over a fantastic long-range score moments later, before Jessie Quinlan converted a free to help her side go 0-6 to 0-2 ahead as referee Padraig Dunne blew the whistle for half-time.

St Brigid’s also had the wind advantage in the second-half, and they used it to their advantage to take a commanding lead in the opening stages of the second-half. Aoife Carroll played it to Galbraith, and she showed her accuracy with another outstanding score from an acute angle.

Jessie Quinlan was dominating for St Brigid’s in the middle of the park, and she caught a Camross puck-out and fired it into the full-forward line. Galbraith managed to scoop the sliotar up and place another between the uprights.

Ponts from Tiegan Bowe and Quinlan (free) had St Brigid’s up by eight, before Camross finally ended their scoring drought with an Andrea Scully point. Clodagh Tynan hit back with a free for St Brigid’s, but Camross were then given a lifeline.

Andrea Scully cut in from the wing and flicked the ball into the St Brigid’s net, and the lead was cut to five. However, St Brigid’s settled the storm quickly and ran home comfortable victors with the final scores coming from Zoe Daly, Quinlan (free) and Galbraith.