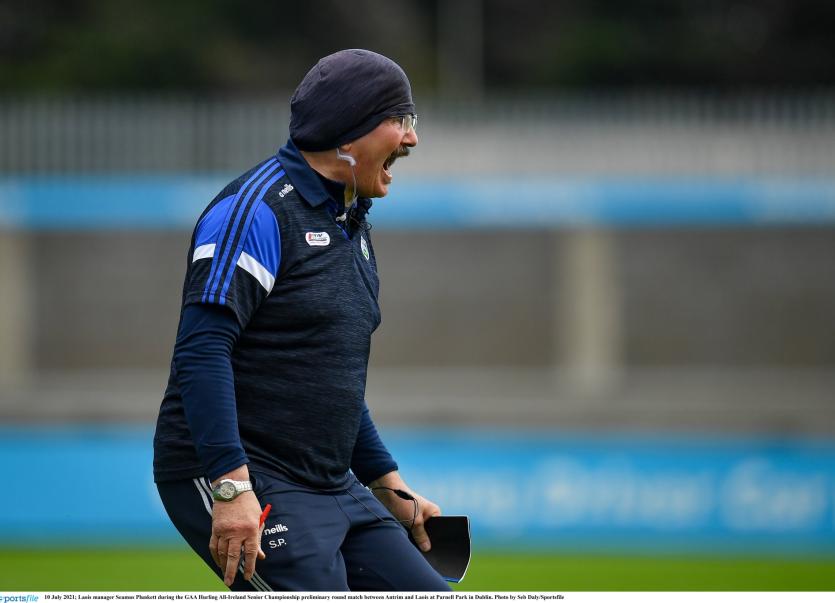 As Cheddar Plunkett stood under the terrace beneath the Summer sun in Parnell Park to give his post-match analysis, the relief on his face was clear. His side almost blew a 10-point half-time lead, nearly allowing Antrim back into the game and when referee Sean Cleere’s whistle for the second water break went, Cheddar was the most relieved man in Donnycarney.

Antrim were roaring back into the game, having outscored Laois by 2-03 to 0-01 in the final 10 minutes of the third quarter, to reduce the deficit to just two points. To add to Laois’ woes, Ross King received his marching orders after a second yellow card and Sean Downey had been sent to the sin bin, meaning Laois would restart the final quarter with just 13 men against an Antrim side who had just hit fifth gear.

However, in remarkable fashion, Laois turned it around, steadied the ship, and regained control, scoring 1-03 on the trot and all but ending the game as a contest. Speaking after the game, Cheddar was ecstatic with the win, and most importantly keeping their Liam McCarthy status for 2022.

"It was all about winning really. The result obviously means that Laois are playing Championship (Liam McCarthy) hurling next year and gives us a chance to get ourselves re-organised and focused and to bounce back into a Leinster Hurling Championship

"It has been a very very tough year. A new management team came in during a pandemic and in my time, and I’ve been involved with teams for a long time, it is probably the biggest injury crisis of key players of any team I’ve ever been involved with. One day we would actually have someone back like we actually had ‘Picky’ (Stephen Maher) picked to play right half back and we lost him yesterday so that just tells you the difficulties we have had to work with this year.

"I have to give incredible credit to each and every Laois player for their commitment and digging out the win and digging out the ball, making sure we stayed on the front foot. Antrim had a chance when they had the penalty and they had momentum behind them at that stage and they were playing with two extra men and if they had scored that, it might have been even tighter at the end but you have to credit Laois.

"They came out with ball after ball, so it’s just brilliant to stay in this Championship but I am really aware and very clear on what the team needs to do to step up and be competitive at the top level.

“You can play all the tactical systems you like but without that level of real work rate, you can do all you like, you’re not going to get anywhere and I thought Laois brought it, including the people on the sideline and the people who came in. I have seen that already in some games this year, the second half up in Corrigan Park, the second half against Kilkenny in Nowlan Park, there were patches of the whole team collectively going for it, going toe to toe and I thought we got 70 minutes of that and that’s what made the difference today’

Despite the impressive victory, Cheddar remarked after the game that there is still a significant gap between some teams competing in The Championship,

“We are playing Division 1 teams, All Ireland winning teams, that’s who you’re playing. Laois were playing at one stage with 11 of their top 20 players missing, probably 11 starters. You simply can’t do it at this level and this is no disrespect to Antrim, this is Laois, Westmeath, Carlow, all of us are in this boat together, we have to make dramatic improvements to beat some of these teams.

"Let’s look at our record, we haven’t beaten a top team in I don’t know how many years, with the exception of Dublin in the championship two years ago and yet people are saying oh this is our third defeat, fourth defeat, fifth defeat. People need to wise up about the gap that Laois hurling needs to make here, at minor level, at u21 level and at any level to be competitive against the top teams.

"We are going to do the very best we can with this team and give them every opportunity we can to win these matches, but it is a vast gulf. It would be really helpful to Laois hurling if we dealt in reality of where we are and how we can get up to there rather than just the number of defeats we have had.

It is back to the drawing board for Antrim and they will play their 2022 hurling back in Joe McDonagh, something which Cheddar admits is a ‘crying shame’, pointing out that it has no benefits to hurling,

"You have to give credit to Antrim. I am a hurling man and I would love to see Antrim hurling in a Leinster Championship next year and why we can’t just go for that and take that, I don’t know. I think it’s shocking. I don’t want to be looking down on Antrim, I am not that type of person but here’s a team that has worked really hard, got all their teams playing, Darren (Gleeson) has got a system going, has got people behind him and suddenly now, we are putting them back in the shoot again, sure that can’t make sense in my view. That could very well be us next week, it could be anybody, I’m not just saying it’s Antrim, it’s just Antrim at the minute.

"Surely there is a better way of developing and growing the game at this level of counties to give them a chance to step up to that next level. It is easy for me to say today because we are after winning a match. If we had been beaten today, it’s still the same fact.

"All of these teams need something more than just going up and down like that and expecting that they are going to produce it one year and then go down and work hard again and come up the next year. It doesn’t work like that. Players lose interest and you are missing players then through injury and you cannot afford to do that and that’s what happens when you go up and down like that unfortunately".