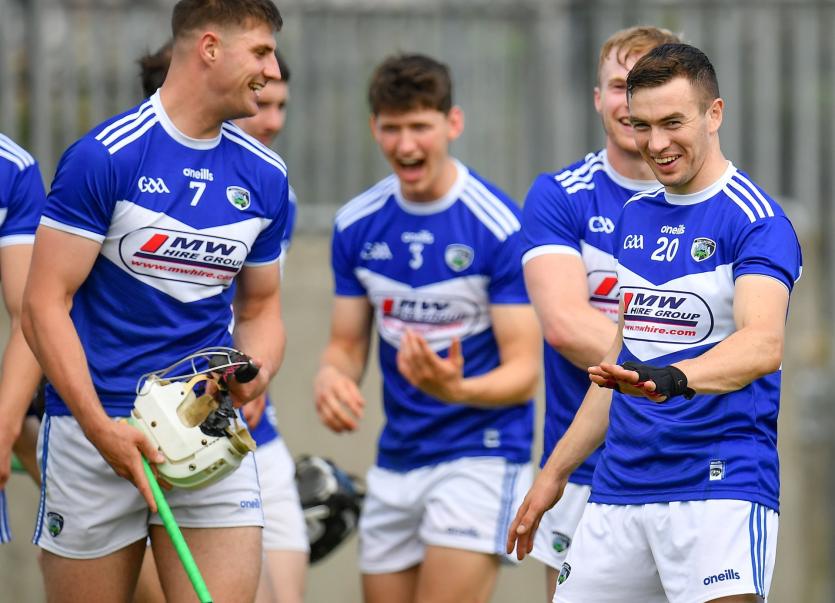 Smiles all round as Laois get the job done

Laois have their name in the pot for Monday morning’s draw after a six-point victory over Antrim. Despite the six-point victory and a 10 point lead at half time, Laois survived the comeback and 2-02 from Paddy Purcell helped the Laois men to victory in what was a thriller in Parnell Park.

It was an intense and fiery battle from the start with no fewer than three yellow cards inside the opening eight minutes. A fired up Laois started the better of the two sides, and when Fiachra C.Fennell won the throw in, he teed up Podge Delaney who split the posts with eight seconds on the clock. Ross King added a minute later when a long Enda Rowland puck out landed on the Rathdowney-Erill man.

Laois were on top for most of the first quarter as they looked a different side than their most recent outing against Wexford and they dominated in all sectors of the field. Antrim did stay in touch with the Laois men, mainly from the placed ball accuracy of Ciarán Clarke in the opening exchanges but points from Paddy Purcell, Willie Dunphy, Ross King and several points from PJ Scully, including a delicious sideline from 65 yards out gave Laois a commanding seven point lead at the first water break, after an excellent opening quarter.

Antrim settled after the first water break, and they reduced the deficit to five with another free from Clarke and a fine effort from James McNaughton. However, it was the Laois men who took complete control until half time. Purcell, Jack Kelly and Dunphy all raised white flags before Purcell raised the green for the first time in the game.

Fiachra C.Fennell did well again to recover a lost ball and he handpassed to Purcell, who set off on one of his marquee runs, before burying the ball past Ryan Elliot in the Antrim goal with a rasper which flew into the top corner. Ciarán Collier pointed soon after to increase the Laois lead to 12, but two frees from Clarke cut the deficit to 10 points at the half time break.

Keelan Molloy got two points on the bounce and when Eoin O’Neill raced at the Laois defence, he rifled the ball low past Enda Rowland to the net. There was more drama when Conor Johnston was dragged down by Laois defender Sean Downey. The referee sent Downey to the sin bin and awarded Antrim a penalty. Neil McManus took the resulting penalty, which was excellently saved by Rowland.

Pj Scully settled ship with a free but there was more drama to come, when Ross King was given his marching orders when he received a second yellow card for a late swipe, reducing to Laois to 13 men. Antrim capitalised and just before the second water break, Eoin O’Neill raced through again and buried along the ground past Rowland to reduce the gap to two at the second water break.

Laois needed to kill the momentum after the water break, and they did so emphatically. Jack Kelly, Pj Scully and Willie Dunphy all pointed for Laois before the killer blow came from Purcell. Cha Dwyer did excellently to disposes an Antrim defender and the ball fell kindly to Paddy Purcell who buried the ball to the roof of the net for his second goal of the day, and to all but kill the Antrim comeback.

Antrim did get three on the trot soon after courtesy of Keelan Molloy, Neil McManus and Sean Elliot, but Cha Dwyer got an insurance score when he pointed late on to give Laois a six point victory and ensure their name is in the hat for Monday morning’s qualifier draw.