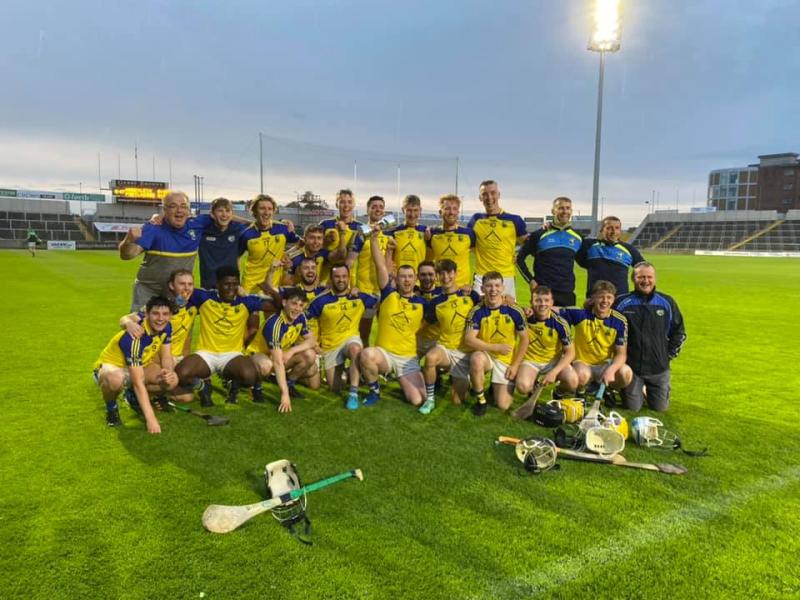 Abbeyleix were crowned Division 3 champions on Thursday evening in O’Moore Park following a comprehensive victory over Portlaoise. A powerful first half performance from Abbeyleix laid the foundations for their impressive win as they carried a 12-point lead into the break.

To their credit, Portlaoise battled hard in the second half, and did knock over some impressive scores, but Abbeyleix were far too strong as they comfortably saw off The Town’s challenge.

Portlaoise were first off the mark, registering their first score through a Keith Murphy free. However, Abbeyleix responded soon after through a free of their own when Colm Walsh pointed from close range after a dazzling run from Lawson Obular.

The opening exchanges were cagey with both sides struggling to impose themselves on the game. Murphy and Walsh once again traded frees and by the time the first half water break came, they were the only two on the scoresheet, with Abbeyleix leading by two.

Upon the resumption of play, it was all one-way traffic as Abbeyleix took control. Points from Walsh, Eanna McWey, Sam Quinn and Mark Cahill increased their lead to six.

21 minutes in, and Cahill raised the first green flag of the day when he rounded the keeper to bury into the back of the empty net.

Abbeyleix were now in firm control, as their forwards were giving the Portlaoise defenders a torrid time. Their touch, control and accuracy were sublime as they looked to build on the goal and they certainly did so in style.

Three further points from Walsh and points from Stephen Thompson and Cathal Doyle put clear daylight between the sides and increased Abbeyleix’s lead to 14 as the game neared the half time whistle.

Two Portlaoise points off the sticks of Sean Culleton and Seamus Keenan left 12 between the sides at the half time break, with Abbeyleix in cruise control.

Portlaoise did register the first score of the half courtesy of another Murphy free, but it seemed like anything Portlaoise did, Abbeyleix did better as Mark Cahill responded for his side. Murphy pointed from a free again before once again, Abbeyleix responded with a long-distance point from Thompson.

A comeback seemed unlikely and when Abbeyleix fired over three successive points before the second water break, any hopes of a comeback was put to bed.

As the rain began to descend on O’Moore Park, more misery descended on the Portlaoise men. Mark Cahill’s goal, which trickled past Noel Costelloe after a long-range effort from Cahill put the icing on the cake for the Abbeyleix men.

Portlaoise did knock over some late points but at that stage, they were consolation scores as Abbeyleix cruised to a 12 -point victory, securing Division 2 hurling for 2022.