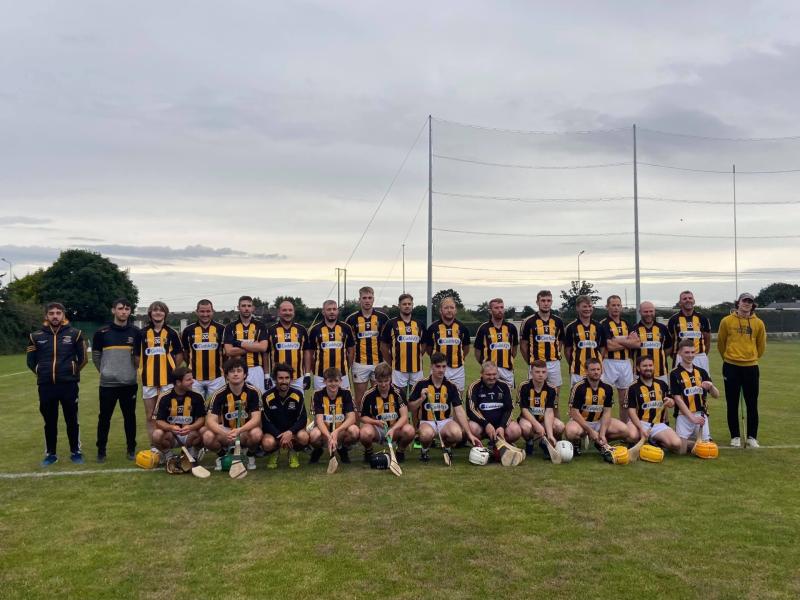 Camross claimed Division 4 league honours in the Centre of Excellence on a wet Thursday evening after they defeated a battling Ballinakill outfit. Daniel Delaney, Cillian Tiernan and Niall Holmes did a lot of the damage for Camross, with Delaney giving a real exhibition in point-taking.

Ballinakill began brightly, as they went into an early lead. Their main man, Eamon Jackman, got them up and running, before corner-forward Eddie Dwyer doubled Ballinakill’s advantage.

Cillian Tiernan scored Camross’ first point of the evening, but Jackman responded, as he who two superb long-distance efforts to put Ballinakill into a 0-4 to 0-1 lead after five minutes of play.

However, Camross gradually began to find their groove. Niall Holmes,  Tomás Burke and Daniel Delaney all raised a white flag each to level proceedings in Portlaoise. Ballinakill hit back through Jackman again, as he knocked over a free before sending over another beauty from way out the field.

Daniel Delaney landed the last score from a placed ball before the first water break was called for, as Camross trailed 0-5 to 0-6 but were playing against the wind.

After the water break was concluded, Camross took control of the match. Wing-back Damien Ryan strode up the field to fire over the equaliser. Jackman missed a few chances during this spell after the break, and Camross punished Ballinakill down the opposite end.

Daniel Delaney and Robert Tyrell landed lovely scores from play, before Ballinakill midfielder Seamus Dwyer responded for them. However, Camross struck for the opening goal to put them well on their way. Damien Keenan’s free dropped short and was flicked away by Ballinakill keeper Declan Hanrahan, but Daniel Delaney reacted instantly to crash one into the net.

Delaney dropped another over the bar, this time from a 65’, before Jackman replied with a much-needed point from a free for Ballinakill. Camross were strutting their stuff now though, as Cillian Tiernan caught a nice, low ball from Joe Ryan, and Tiernan turned on a sixpence before splitting the posts.

Delaney landed another one over the bar, as Camross were dominating the puck-outs on both ends of the field. The rest of the half was a fairly even affair, with Jackman (free), Seamus Dwyer and Cathal O’Shaughnessy (65’) scoring for Ballinakill, while Joe Ryan, Niall Holmes and Delaney (two frees) scoring for Camross. The men in black and amber led 1-15 to 0-11 at half-time.

Niall Holmes, who hurled Senior for Camross only a few years ago on their title-winning teams, started the second half by firing over two points. Then Camross’ second goal of the game arrived.  Tomás Burke's effort from distance came back off the post, and half-time substitute Tadgh Doran was on hand to bury to the net.

Ballinakill had their best period of the game though after that goal went in. Jackman pointed three frees over the bar, before Eddie Dwyer curled over a brilliant point from an acute angle. Jamie Drury grabbed another score for Ballinakill, but they were dealt a final blow when Camross scored a third goal.

Second half substitute Greg Cuddy picked out Cillian Tiernan with a nice ball, and Tiernan secured the sliotar before beating his mand and crashing the net. The score during the second water break was 3-17 to 0-16 to Camross.

Camross had the contest sewn up at this stage, and they finished things off in style towards the end when Brendan O’Sullivan scored a fourth goal. They ended up sixteen point winners in this Division 4 decider.