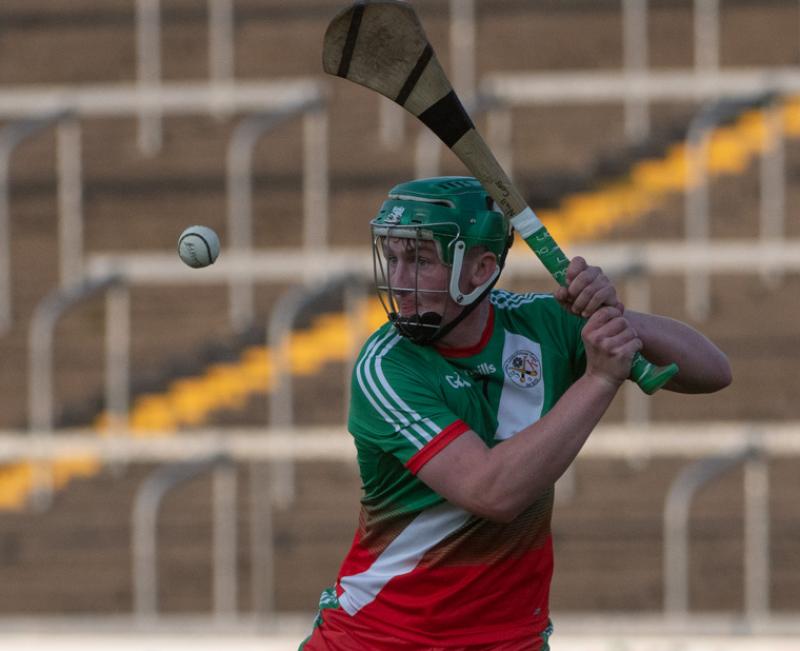 Patrick Whelan in action for Borris-Kilcotton

Having drawn their opening round game with Abbeyleix two weeks ago, Borris-Kilcotton got their first championship win of the campaign on Saturday as they survived a second half Camross revival to win by six points.

They were coasting at half time but an almighty Camross second half fight back made it a nervy and sloppy second half from the Borris-Kilcotton men.

Aaron Dunphy fired over eight points from play and while they did deserve the win, their second half performance will give them plenty to work on in the coming weeks.

Camross were wasteful in the opening half in particular but they roared back into life in the final 30 minutes with some delightful play and score taking.

Noah Quinlan was a late addition to the Borris-Kilcotton starting team but it only took him two minutes to make his presence felt as he slapped over the opening score.

Camross Captain Mark Dowling replied with a fine solo score but Borris-Kilcotton wing forward Aaron Dunphy was about to come into his own. He fired two in a row from the right wing and while Zane Keenan did get a free back for Camross, Dunphy landed his third point in the ninth minute to put them 0-4 to 0-2 in front.

Quinlan grabbed his second of the day shortly after and it looked like they had Camross' number. Slowly but surely, they began to come back into it.

Just before the water break, Ciaran Collier picked up a loose ball in the Borris-Kilcotton full back line, made space for himself and drilled low to the net to leave it.

PJ Scully did reply with a free and Borris-Kilcotton had an 0-8 to 1-3 at the opening water break.

Aaron Dunphy could do no wrong and his fourth of the day from distance opened the scoring in the second quarter. Andrew Mortimer replied instantly after a mazy run through the middle and the game was heating up.

Borris-Kilcotton poured cold water on the Camross revival on 19 minutes after Noah Quinlan expertly picked out Neil Foyle on the edge of the box and a scorching low drive found the corner of the net to put his charges 1-9 to 1-4 in front.

1-9 to 1-4 went to 1-11 to 1-4 thanks to Daire Quinlan and Emmet Jones before Zane Keenan pulled one back as Camross tried hard to pull back the margin. Aaron Dunphy and Noah Quinlan extended the lead coming up to the break before Quinlan again an Daniel Delaney exchanged scores in injury time to leave it 1-14 to 1-8 at the break.

The result was well and truly put to bed in the opening 10 minutes of the second half as the winners outscored Camross 1-5 to 0-2. Aaron Dunphy brought his personal haul to seven points from play while he turned provider for their second goal on 40 minutes when he fed PJ Scully to fire home from close range.

At 2-19 to 1-10, there looked to be no way back for Camross but they began to mount a massive comeback. They got five of the next six scores after that Borris-Kilcotton goal with two for Darren Gilmartin along a pair of frees from Zane Keenan and one from play from their ace marksman but the gap was still eight points - 2-20 to 1-15 at the second water break.

Add on to that two quickfire points straight after the water break and they had the margin down to six points with a little over 10 minutes to play. David Mortimer was causing havoc in the Camross full forward line since his introduction and his point, coupled with a rousing Andrew Mortimer point from distance made it 2-20 to 1-19 with six minutes to play.

Borris-Kilcotton needed a score badly and it arrived five minutes from time with PJ Scully converting a close range free. They were under the cosh and really struggling for possession as the Camross train picked up speed. Neil Foyle added another from out near the sideline but with the next attack, Dwane Palmer had a superb goal chance only to be denied by Borris-Kilcotton keeper Eoin Fleming.

A six point game with a minute of normal time to play, Aaron Dunphy landed his eight point from play to make it a three score game.