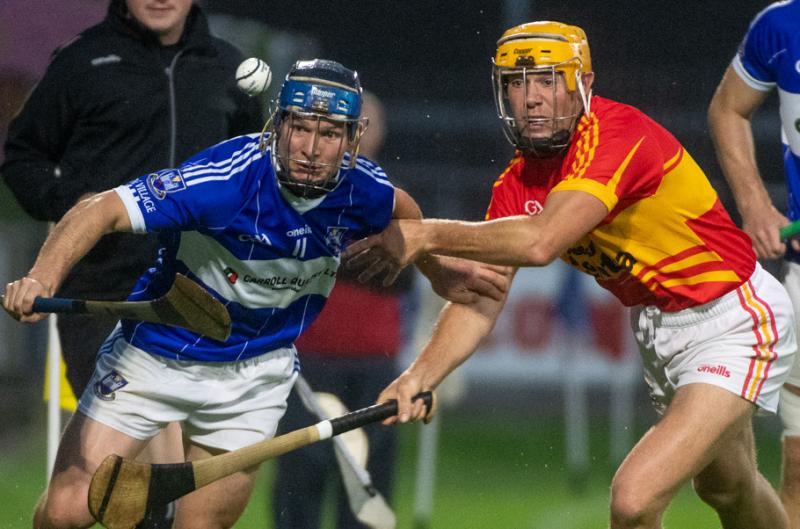 Goals win games and The Harps found that out the hard way after they conceded four to Castletown which cost them the game.

Martin Phelan fired in a hat-trick, while Ryan Mullaney also scored a goal from a penaly, as Castletown did enough to maintain their 100% record in the Laois Senior Hurling Championship for 2021.

Castletown started the game full of confidence after their victory over Rosenallis two weeks ago, as they raced into an early lead. Full-forward Martin Phelan fired over two points from play, while Joe Phelan cut in from the wing to gert another.

The Harps hit back through Laois U-20 star James Duggan, who was kept scoreless against Clough-Ballacolla, fired over two quick-fire scores to get The Harps and him up and running for the evening in O'Moore Park.

Castletown came back at them though and took the inititiative after that. Joe Phelan, Ryan Mullaney (free) and Martin Phelan all raised white flags before Martin Phelan fired in the first of his three goals.

The Harps ended their scoring drought through a Michael Lanigan free, but trailed 0-3 to 1-6 at the end of the first water break.

Lanigan landed a point from play upon the resumption, but Castletown scored their second goal straight after that to put more distance between the sides on the scoreboard. Martin Phelan was tripped just before he was about to pull the trigger in the square, and Ryan Mullaney came up from centre-back to distpatch the penalty.

Tadgh Cuddy converted another free, before The Harps began to crawl back into the contest before half-time. Lanigan landed two frees, while Barry Dunne and Pat Walshe chipped in with a point apiece to leave The Harps trailing 0-8 to 2-8 at half-time.

Shane Phelan fired over the opening score from the throw-in for Castletown, but The Harps strung three on the bounce to close the gap to four. Lanigan landed two more frees either side of a James Duggan score off the post.

The excellent Joe Phelan replied for Castletown, but points from Ciaran Comerford, Richie Saunders and Eoin Clancy were followed by two more Lanigan frees to leave the teams level.

However, just before the water break, The Harps were dealt a hammer blow to their momentum. The Harps backs stood off of Martin Phelan's run inside, and he was allowed room to fire in his second goal of the game to put Castletown back ahead.

The Harps heads didn't drop though, with Lanigan pointing two frees straight after the water break to cut the gap to one point. Ryan Mullaney landed a long-range free for Castletown, but points from Daniel Comerford and Lanigan (free) meant we were level again in O'Moore Park with less than ten minutes remaining.

However, they say goals win games and Castletown managed to grab a fourth to undo The Harps hard work once more. Full-back Conor Dunne lost his footing at the back for The Harps, and Martin Phelan pounced for his hat-rick goal.

Tadgh Cuddy (free) and Shane Phelan stretched Castletown's lead out further, and while The Harps hit the net late through Eoin Clancy, further scores from Conor Phelan and Shane Phelan proved enough for Castletown to get over the line.