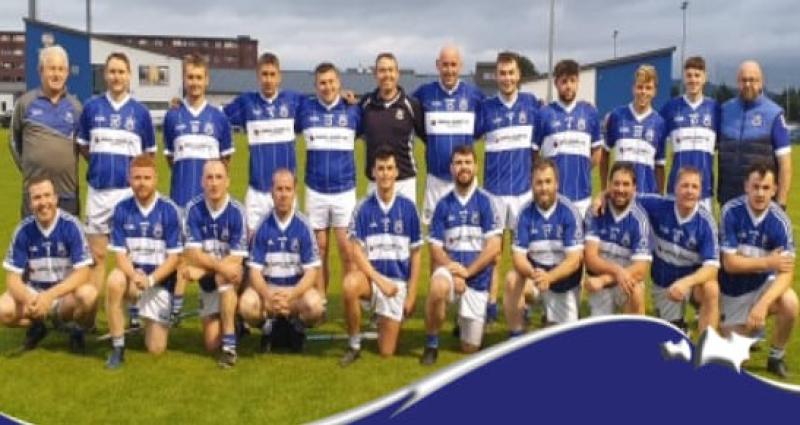 On an awful night for hurling in the Laois Centre of Excellence in Portlaoise, this Junior ‘C’ final between Castletown and Clonaslee St Manman’s was never going to a very pretty affair. However, Castletown won’t care, as they did enough to come away with the victory over a Clonaslee St Manman’s side who played most of the match with fourteen men.

From the start, Enda McEvoy decided to fire a shot in from long-range and test Castletown keeper Barry McKelvey on this slippy night, but McKelvey controlled well and cleared the danger.

The first score of the game didn’t arrive until just under ten minutes had been played, as both sides struck wides and showed a touch of nerves during the opening stages. Seamus Lyons did score the opening point for Castletown from a free, but Sean Dunne cancelled that out with a free down the opposite end for Clonaslee.

Castletown began to settle down after and play the better hurling. Ciaran Dunne scored a point to nudge them back in front, although it could so easily have been a goal. Ger Cuddy then put Castletown two to the good after he capitalised on a poor Clonaslee puck-out and split the posts.

Both full-forwards, James Young and Seamus Lyons, landed points from placed balls for Clonaslee and Castletown respectively, as Castletown went into the first water break with a 0-4 to 0-2 advantage.

Upon the restart, all the hurling was played by the Castletown men. Lyons landed two more points from frees, while Patrick Mullaney also got a point off a placed ball, as Clonaslee’s indiscipline cost them.

Clonaslee were then dealt a hammer blow, as their full-back, Ger Dunne, received two yellow cards in the space of a minute. The first was for a foul on Lyons, and then after Dunne continued to remonstrate his annoyance at the decision, Anthony Costigan opted to show him the second yellow.

Lyons converted the resulting free from close-range, and then the same man scored the point of the match, as Lyons caught a ball in cleanly and fired one over the bar to push Casletown’s lead out to seven.

Clonaslee, to their credit, refused to throw in the towel and three points from the hurl of James Young before half-time meant they only trailed 0-5 to 0-9.

In the second half, the rain let up, but the scores became even rarer. Castletown continued to plug away, with Patrick Mullaney and Lyons knocking over a free each to put them well into the driving seat. Clonaslee did not manage to score in the third quarter, as they were finding it difficult to get ball to stick in the full-forward line.

James Young converted a couple of frees near the end, but Clonaslee couldn’t get in for the goal that could swing this game around. Patrick Mullaney was the best player on the pitch, with his reading of the game at centre-back for Castletown impeccable, and that helped them run out four-point winners in the end.

Cash at the stiles to return temporarily for Laois GAA matches as Capacity at O'Moore Park increases to over 10,000

Portlaoise Leinster dream comes to an end despite heroic display

In Pictures: Paralympian Gary O'Reilly meets the people of Portlaoise with Bronze medal