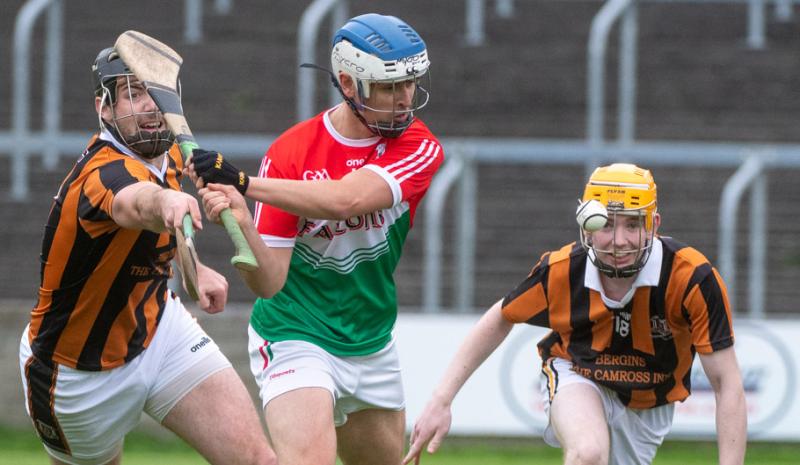 Camross got their Premier Intermediate championship campaign back on track on Sunday after they comfortably took care of Clonaslee. Clonaslee looked the livelier outfit in the opening half but Camross roared into the game in the second half to grab a deserved nine point win.

After taking a heavy beating off Portlaoise in the opening round, they look to be back on track with Tomas Keyes and Dan Delaney leading the way up front.

John Rowney pucked over the opening score of the game inside the first minute and set Clonaslee on their way. They took an early command in the third minute when a long delivery in from Niall Corbet wasn't dealt with by Camross keeper Cillian Tiernan and Patrick Hyland was on hand to find the net.

Camross had work to do and they did get up and running with three points by the 10 minute mark with centre forward Matthew Collier grabbing the pick of them.

Liam Senior got his first score of the game just before the water break and pushed Clonaslee into a 1-3 to 0-3 lead at the end of the first quarter.

Clonalsee looked to be stealing a march after the water break with two points from Liam Senior and DJ Callaghan but Camross upped the ante in the final 10 minutes of the half and ate into the lead.

Niall Holmes landed two super scores either side of a tasty Darrell Dooley point and the gap was down to a brace - 1-5 to 0-6.

Liam Senior made it a three point game again shortly before half time but Camross finished well with a Dan Delaney '65 and free to leave it a one point game at the break.

Tomas Keyes missed a glorious goal chance after the restart but he made up for it on 34 minutes when his point brought the teams level at 1-6 to 0-9.

Dan Delaney edged the Camross men in front with a free but nine minutes into the second half and Clonaslee had their second goal after Liam Senior sent a rocket of a penalty to the net to put them 2-6 to 0-10 in front.

That score might have been the kick they needed to push on but in fact it awoken Camross as they went on to puck five points on the spin to take a 0-15 to 2-6 lead at the second water break.

Dan Delaney roared into the game during that scoring spell hitting four while wing forward Kevin Lalor landed the fifth one to put them two in front with 15 minutes to play.

They gave themselves real daylight with the first score after the water break. With acres of room left in the Clonaslee rearguard, Greg Cuddy got in behind and squared a handpass to the waiting Tomas Keyes and the corner forward finished to the net from close range.

That pretty much put the result to bed as the last 10 minutes or so petered out. Dan Delaney kept knocking over the frees with three more in the closing stages as Camross ran out comfortable winners in the end.