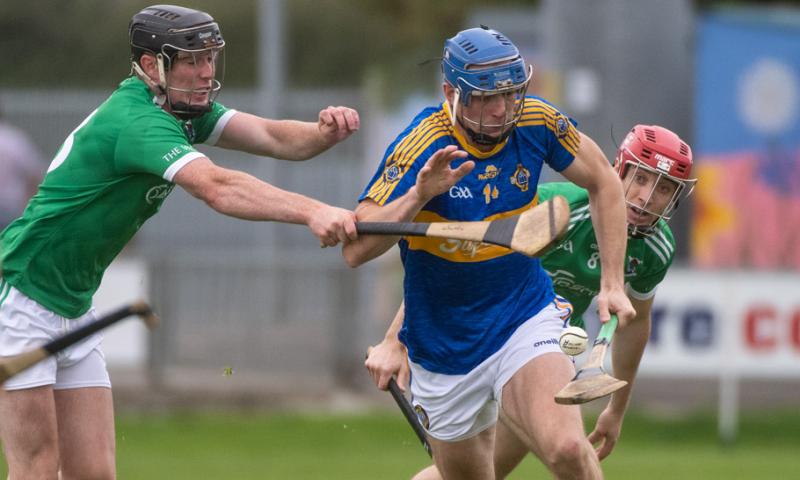 Clough-Ballacolla booked their place in the knockout stages of the senior hurling championship on Sunday after they cruised to an emphatic 29 point win over Rosenallis.

The game was as one sided as the scoreline suggests as the reigning champions showed no mercy racking up a huge tally in the 60 minutes.

Rosenallis are still in with a live chance of making the quarter finals and their game with The Harps in two weeks time will be an all or nothing affair for both of them.

Paddy Keating got the scoring underway with a free in the opening minute but once Clough-Ballacolla got their opening score in the fourth minute from Jordan Walshe, they found their feet and took charge of the game.

Diarmuid Conway raided up field for a superb point and while Rosenallis were briefly back level, the opening goal landed in the seventh minute. Robbie Phelan raided in field from the wing and his goalbound shot deflected off John Maher to deceive keeper Stephen Kelly.

Points from Jordan Walshe, Stephen Maher and a superb catch and strike from Willie Dunphy pushed them out tom 1-5 to 0-2 as Rosenallis struggled to make anything stick.

Paddy Keating did get their third point with a free but Clough-Ballacolla kept the hammer down with long range scores from Aidan Corby and Jordan Walshe either side of a Stephen Maher free to give them a comfortable cushion at 1-8 to 0-3 at the water break.

Donnagh Callally had an excellent goal chance for Rosenallis after the water break but Cathal Dunne made a fantastic save to deny him.

Then, down at the other end, Clough Ballacolla struck for their second goal. A long ball in was contested by Stephen Maher and John Maher but with Rosenallis keeper Stephen Kelly coming strong and taking man, ball and all, the sliother broke free and Stephen Bergin fired home.

Frees from Paddy Keating and Brian Fitzpatrick narrowed the arrears but only briefly as Aidan Corby and Stephen Maher both added to their tallies either side of the aforementioned Maher seeing his penalty brilliantly saved by Kelly in the Rosenallis goals.

David Dooley did get one back for Rosenallis before the break but they had a stiff mountain to climb in the second half to overcome a 2-10 to 0-6 scoreline at half time.

Any faint hope of a Rosenallis comeback was put to bed in the opening four minutes of the second half with Stephen Maher landing four points in a row, two from play to give them the perfect second  half start.

The margin was only increasing and with two more Maher points and Stephen Bergin grabbing his second goal, they led 3-18 to 0-10 at the second half water break.

They kept the scores coming too with Stephen Bergin, Mark Hennessy and Willie Dunphy all registering points as the game entered the final 10 minutes.

Substitute Mark Hennessy caught a brilliant ball, squared to Willie Dunphy and Dunphy sent a rocket to the net for their fourth goal five minutes from time.

Rosenallis did get in on the goal action in the closing minutes when Paddy Keating found the net but Clough Ballacolla had more to come as substitute Cillian Dunne caught a high ball, turned and fired to the net to make it 5-25 to 1-10.