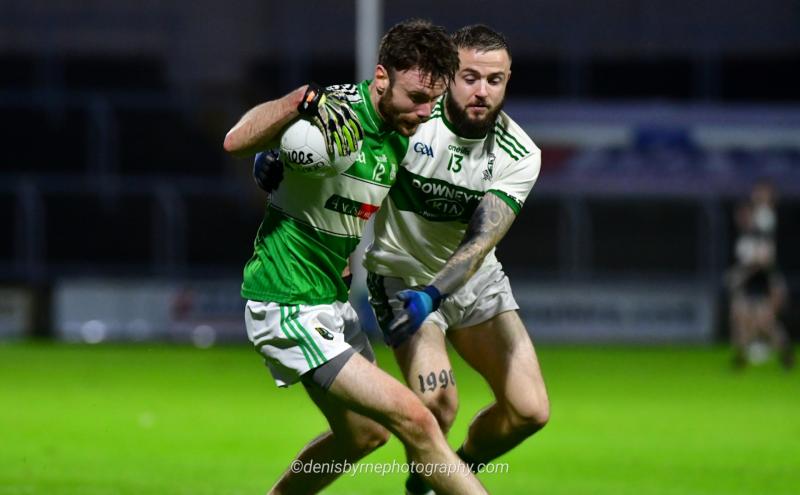 Ballyfin have been the shock specialists in recent times in the Laois Senior Football Championship, but if they had beaten their opponents tonight, it would have been no shock. This clash was a tough one to call for most people, as a Portlaoise side on the decline met a Ballyfin outfit with plenty of youthful talent on their side.

Ballyfin had one big advantage over Portlaoise, and that was that they had the best forward on the pitch by a mile in Sean Moore. He helped himself to 1-6 in the first half and it seemed as if he was going to continue to torment Portlaoise in the second half.

However, Ballyfin corner-back George Lanham received a second yellow card with twenty minutes left, and that changed the game completely. They struggled to get out of their half after that, as Portlaoise boxed them in.

Portlaoise unloaded their bench throughout the second half, with Benny Carroll, Jason Maher and Ronan McEvoy providing crucial scores to turn the result around and make sure Portlaoise remain in contention for the Jack Delaney Cup.

Ballyfin got off to a blistering start, with Sean Moore tapping over a free after strong running from Ricky Quillanan, and then the first goal of the game went their way.

George Lanham sent a ball in that looked like it would drop into Michael O'Connell's hands in the Portlaoise goal, but because of the wet surfece, O'Connell let it slip through his hands and Ballyfin had their dream opening.

Portlaoise, to their credit, responded well to the setback. Paul Cahillane pointed a free for their first score, and then got one from play after Portlaoise turned over Ballyfin thanks to defending in numbers.

Sean Moore replied with a lovely point for Ballyfin though, as he curled over from an acute angle. Moore converted another free moments later, before Ballyfin buried goal number two.

Jack Priestley's shot from distance came back off the uprights and fell into the man Portlaoise didn't want to see with it. Moore calmly dispatched the ball beyond Michael O'Connell's reach, and after fifteen minutes, Portlaoise were gobsmacked.

Moore was proving unmarkable despite Portlaoise's packed defence, as he caught another ball in, this time from George Lanham, and raised his hand to claim the mark. Moore landed the point from the mark as well, as Ballyfin led 2-4 to 0-2 at the end of the first water break.

Cahillane kicked over the first point upon the restart after good work from Damon Larkin and Gary Saunders. Ballyfin replied again though, with Allan Connolly coming uo from centre-back to burst through a couple challenges and firing over the bar.

However, Portlaoise, who had been completely outplayed for most of the first half, scored a much-needed goal to get them back into the game. Kieran Lillis rose above James Finn and fielded excellently, before picking out Conor Boyle in acres of space. Boyle played it to Ricky Maher, who was dispossed by Allan Connolly but the ball fell into the onrushing Damon Larkin, who finished low to the net.

Portlaoise cut the deficit to five points as we approached stoppage time in the first half. Cahillane noticed the run of Damon Larkin inside and found him, and Larkin landed a sublime score.

Moore knocked over a free in stoppage time though, as Ballyfin raced in with a 2-7 to 1-4 advantage and they were fully deserving of it too.

The second half began with Portlaoise dominating possession, but failing to turn that possession into scores. The same problems that resulted in their defeat to Courtwood arose again, with Kieran Lillis, Gary Saunders and Conor Boyle all guilty of missing chances.

However, Ballyfin were dealt a hammer blow on the 38th minute. Damon Larkin was hauled down heading towards goal by Ballyfin corner back George Lanham, who was already on a yellow card, and he given a second and subsequently sent off.

Ricky Maher did pop over a close range free, but Portlaoise continued to be gulity of slow play and poor shot selection. Gareth Dillon did deliver another score before the second water break, as Portlaoise trailed 1-6 to 2-7.

Portlaoise almost got in for a goal straight after the restart, as Ciaran Fingleton was turned over in his own half and Portlaoise ran at pace. Damon Larkin, Kieran Lillis and Benny Carroll were all involved in a move which saw Jason Maher a sniff at goal, but he was brilliantly blocked down by James Finn.

Ballyfin just could not get out of their own half for the next five minutes, but Portlaoise also seeminly couldn't find a way through. However, 'The Town' finally got a bit of luck go their way. Cahillane's shot from close range fell short, but substitute Benny Carroll managed to flick it into the back of the net and Portlaoise were now within a single point with an extra man.

Another Portlaoise substitute, Jason Maher, landed the leveller with 55 minutes one the clock. And then three minutes later, Ronan McEvoy fired over a gorgeous long-range free to put Portlaoise ahead.

Ballyfin had a chance on the counter-attack to level, but they were too ponderous with possession and Portlaoise turned them over. Ciaran McEvoy fisted over one score and then kicked another, and that meant Portlaoise led by three points in stoppage time.

Ballyfin went in search of an equalising goal, with substitute Adam Connolly floating a high ball into the square, but the outcome was only an Aidan Keenaghan point and that wasn't enough as Portlaoise went through.