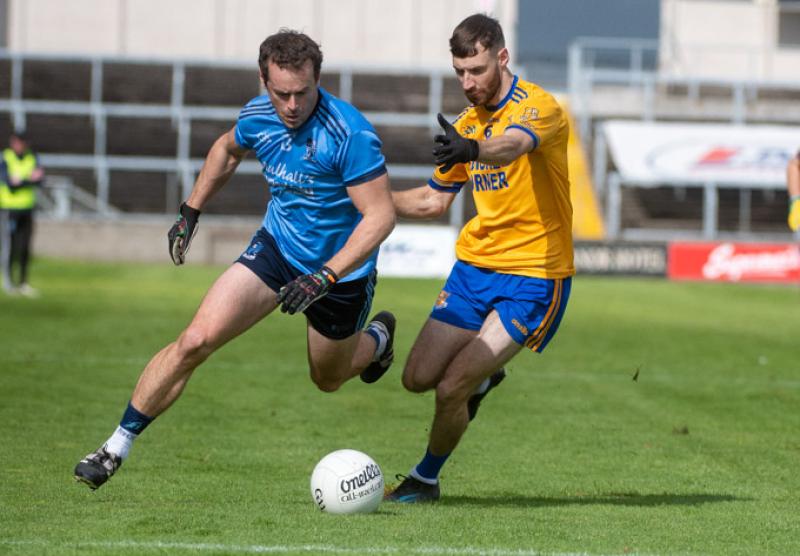 It took 80 minutes to separate Ballyroan Abbey and St Joseph's in O'Moore Park on Sunday afternoon but then the dust settled it was the Ballyroan men who advanced to the quarter finals of the Laois senior football championship.

Two goals from Cathal Doyle powered them to the win in a low scoring and dogged affair.

The opening half was a low scoring, cagey and error ridden 30 minutes of football. With underfoot conditions extremely tough and a strong breeze blowing down to the Abbeyleix end, both sides found the going tough.

Brian Whelan opened the scoring for the Ballyroan men in the fourth minute with a close range free but it was the St Joseph's men who finished the opening quarter the stronger with two points, one from Brian Daly in the ninth minute and the other from Aiden Brennan four minutes later sending them in leading 0-2 to 0-1 at the water break.

Ballyroan levelled straight after the water break with Charlie Whelan kicking over but it was a frustrating period of football for both sets of teams.

We had to wait until the 30th minute for the next score but it was a big one for Ballyroan. They came through the middle and when the ball was set up for Padraig McMahon at the back post, his palmed effort was blocked on the line but Cathal Doyle was there to follow up and force the ball over the line to give Ballyroan a 1-2 to 0-2 lead.

Colm Byrne followed that up with a fisted point as Padraig Clancy's charges held a 1-3 to 0-2 half time lead.

St Joseph's knew they had to seriously improve in the second half and with Jason Campion introduced at half time to full forward, he made an instant impact kicking the opening score of the second half.

They followed that up with an Oisin Hooney free with Ballyroan centre back Martin Scully picking up a black card for the foul committed.

It was all St Joseph's now and centre back James Kelly raided up the field to kick another score and leave just a point between them on 37 minutes.

Brian Whelan then missed a free straight in front of the goal for Ballyroan but he made up for that a few minutes later to kick over from the exact same spot to make it 1-4 to 0-5 after 41 minutes.

Jason Campion was proving a handful and he took and scored a mark on 43 minutes to bring it back to a one point game. The errors continued to pile up for both teams and with every score crucial at this stage, Brian Whelan did send over a lovely score with the outside of his boot on 45 minutes to give Ballyroan a 1-5 to 0-6 lead.

There was one more score before the water break with Oisin Hooney selling a dummy before curling over to leave it a one point game - Ballyroan 1-5 St Joseph's 0-7.

Ballyroan were dealt a blow when Shaun Fitzpatrick was black carded with nine minutes to go as they still held the slender advantage.

The next score of the game didn't land until injury time when James Kelly floated over a free from 45 metres to level the game. Josh O'Brien had a good chance a minute later to kick St Joseph's into the lead but his effort drifted just wide.

Extra time got off to a flying start when 30 seconds after the restart the returned Padraig McMahon dropped a long ball into the St Joseph’s goalmouth and Cathal Doyle reached above everyone and fist the ball to the net.

Five minutes later Matthew Campion passed to Michael Keogh who cut inside his marker and sent a cracker to the net.

But Ballyroan were back in front just before half time thanks to an excellent Davin McEvoy point. Four minutes after the restart they doubled their advantage through Davin McEvoy again.

St Joseph’s kept the pressure on launching attack after attack looking for the goal they needed but the Ballyroan defence held solid.