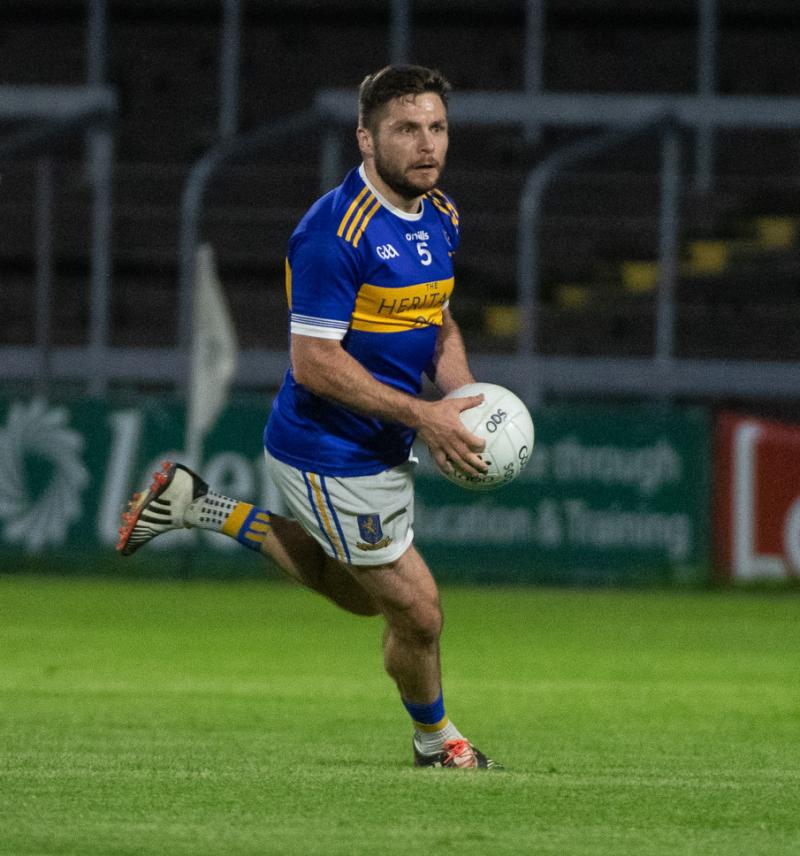 O'Dempsey's were expected to defeat Rosenallis and fairly comfortably after their mpressive first round display against Emo saw them score 2-18.

However, Rosenallis were dogged throughout and stuck with O'Dempsey's right until the end, but just lacked a bit of a scoring presence with Ronan Murray only available for fifteen minutes at the end through injury.

Rosenallis were first on the scoreboard in O'Moore Park, with Colm Poole firing over from close range. O'Dempsey's replied well, as Mark Barry slotted a difficult free from a tight angle, and then Matthew Finlay found the posts from play.

Corner forward Brian Fitzpatrick levelled things at two apiece, but O'Dempsey's marksman Mark Barry went down the other end and sold his marker a beautiful dummy before spliting the uprights.

Colm Poole levelled it again with a free for Rosenallis, but O'Dempsey's replied with two points through two backs, Barry Kelly and Shane Nerney.

Brian Fitzpatrick fired over the last score before the water break for Rosenallis, who trailed 0-4 to 0-5 after fifteen minutes of play.

Donnagh Callaly landed his first after the break in play to level proceedings once more, as Rosenallis dominated the kick-out through a mixture of short and long.

Rosenallis should have had a goal just after twenty minutes of play, as they missed three chances to put the ball in the back of the net. Brian Fitzpatrick's first chance was well smothered by Padraig Bannon in the O'Dempsey's goals,  and then Joey Shelley had the rebounded attemot cleared off the line by O'Dempsey's corner back Stephen Lennon. Finally, Fitzpatrick fired in another shot that was saved away by Bannon once more and O'Dempsey's cleared at last.

Daithi Howlin and Eoin Dunne swapped scores, before O'Dempsey's finished the half strongly to go in with a comfortable half-time lead. Their two main forwards who tormented Emo in round 1, Mark Barry and Matthew Finlay, fired over a few points to give their side a 0-11 to 0-6 advantage at the interval.

Barry landed the first score of the second half as well, as he ran at the Rosenallis defence and was fouled, and Barry converted the free himself.

However, just as you worried that the game was getting away from Rosenallis, they grabbed a crucial goal. Donnagh Callaly cut in from the right wing and it seemed like he would handpass it over, but instead unleashed a rifle of a shot into the roof of the net.

This gave Rosenallis the boost they required, with Poole and Fitzpatrick putting over further points from play, and then Eoin Dunne popped over a free from close range to level the affair once more.

O'Dempsey's substitute Barry Howlin had an immediate impact by blasting one over from close range moments after coming on to regain the lead for his side. Matthew Finlay extended the lead by converting a placed ball.

Rosenallis replied through Eoin Dunne, who sliced over possibly the score of the match with the outside of his left boot. Johnny Kelly hit back for O'Dempsey's, and then Fitzpatrick (mark) and Finlay (free) swapped points before the second water break was called, with O'Dempsey's leading 0-16 to 1-11.

O'Dempsey's almost grabbed a goal of their own upon the restart of play, as Ben Coen's effort dropped into the square, and Nerney's flick was just about cleared off the line by Rosenallis keeper Donal Lalor.

O'Dempsey's substitute Brian Nugent swapped points with Fitzpatrick, who put over another free, and then Brian Howlin scored his second point from play since coming on to extend O'Dempsey's advantage to three.

With two minutes left to play, O'Dempsey's were reduced to fourteen men after Shane Nerney received a straight red card for a high challenge on Jobn Maher.

Rosenallis failed to score though despite being a man up in the remaining minutes, as Ronan Murray received a black card in the last second.