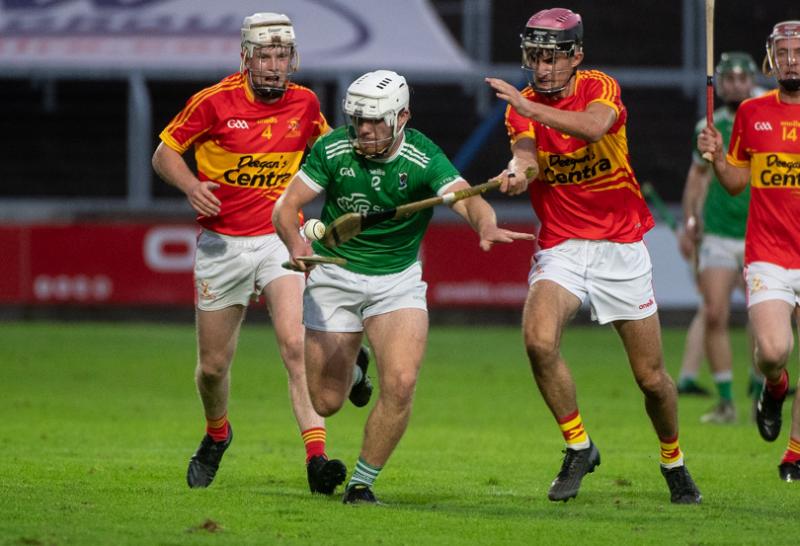 There were dramatic scenes in Portlaoise on Saturday evening when a Brian Fitzpatrick late goal sent them through to the quarter finals. After a tightly contested affair, it was all level as the game entered injury time, and Fitzpatrick was the hero at the death when it was laid on a plate to him from Fiachra C.Fennell. The win sees Rosenallis safe from relegation and they are into a quarter final where they will face Rathdowney-Erill, while The Harps will face a relegation decider with Abbeyleix in two weeks’ time.

It was clear from the start, that it was going to be a titanic battle with both sides reluctant to express themselves in the early stages. Michael Lanigan opened the scoring with a terrific sideline from just under the stand and Rosenallis were quick to respond with a free from Paddy Keating.

With the stakes so high, mistakes were high, and scores came at a premium inside the opening quarter. Rian Edwards put The Harps ahead but John O’Loughlin soon equalised after a good solo run from the Rosenallis man.

12 minutes in, Rosenallis raised the green flag when Donagh Callaly did brilliantly to break through The Harps defence. He showed real composure in front of the goal as he flicked it into the net past Peter Walsh in The Harps’ goal.

Just two minutes later, The Harps nearly got a goal of their own. Eoin Clancy found himself with space in front of the Rosenallis goal and his thunderbolt was well saved by goalkeeper Stephen Kelly. The goal was the difference between the sides at the first water break with Rosenallis carrying a three-point lead into the brief stoppage.

The second quarter was sloppy with both teams experiencing a high wide count. The Harps were very wasteful in front of goal, hitting seven first half wides, many of which from scorable positions.

Two quick fire Lanigan points after the half time break reduced the gap to a single point but Keating responded with a free of his own. Fiachra C.Fennell put Rosenallis back in the driving seat with a good score after an excellent run and further points from David Dooley and Brian Fitzpatrick did stretch the Rosenallis lead once again.

However, The Harps settled themselves and points from Ciaran Comerford and the last of the half from Richard Saunders left them trailing by two at Patrick Phelan’s half time whistle.

The second half started much the same as the first, with a lot of scrappy play and misplaced passes. John Brophy opened the second half scoring and Fiachra C.Fennell responded for Rosenallis with a long range point.

Keating scored a close range free and moments later, he landed an almighty free from inside his own half under the stand, with momentum starting to swing Rosenallis’ direction.

However, The Harps pulled themselves back into contention and hit three points on the trot. Lanigan, Richard Saunders and Pauric Dunne all contributed on the scoreboard to get them to within one and just before the second water break, Lanigan converted a close range free to level it at the break.

Lanigan was on hand again to point from a close range free to put The Harps one ahead and it was the first time they had the lead since the Rosenallis goal. Fiachra C.Fennell levelled matters once again before corner back David Doheny regained The Harps’ one point lead when he found himself in front of the posts.

It was set up for a grand slam finish, and it certainly got that. John Lennon equalised and Brian Fitzpatrick’s free put Rosenallis one point ahead as it entered injury time. Lanigan equalised again for The Harps and for a moment it looked like it may end in a draw.

Rosenallis knew that only a win would do, and when Fiachra C.Fennell broke a tackle to send him goal bound, he had one thing on his mind. He drew the man before neatly laying it to Brian Fitzpatrick who made no mistake in burying the ball to the net to give his side a priceless three-point lead right at the death.

The Harps threw the kitchen sink at the game late on, but it wasn’t to be, as Rosenallis stood tall to progress to the quarter finals and send The Harps to a relegation decider with Abbeyleix.