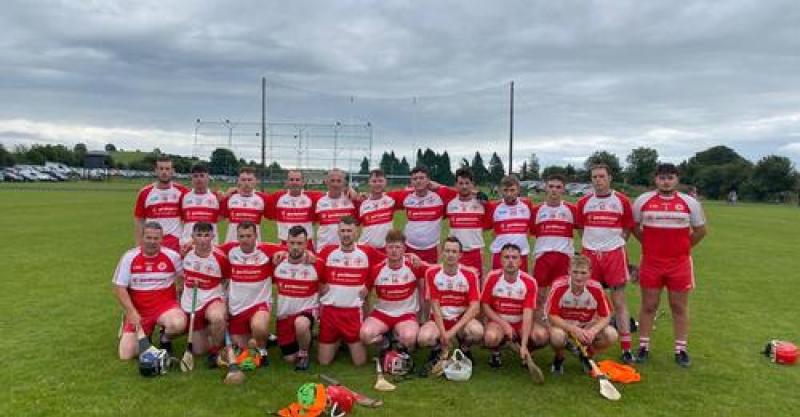 Wing-forwards Niall Sinnott and Adam Kirwan combined for thirteen of Trumera’s twenty scores in their victory over Borris-Kilcotton in the Laois Intermediate hurling championship semi-final on Saturday afternoon.

With the likes of James Kerwin, John O’Connor, Paddy Callaghan, and Bryan Reddin defending strongly from the back, Borris-Kilcotton could not breach the Trumera defence and get the goal they needed in the second half despite veteran Brian Stapleton rolling back the years and sending some delightful scores between the posts.

Trumera can now look forward to a return to the Intermediate hurling final, where this time their opponents will be Clough-Ballacolla who narrowly got the better of The Harps by a single point in the other semi-final.

Trumera started off this semi-final clash in Abbeyleix on fire and raced into a five-point lead. Niall Sinnott and Adam Kirwan landed a free each, before Trumera wing-back Bryan Reddin dispossessed Borris-Kilcotton’s Eoin Fitzpatrick brilliantly before firing over an excellent point from play.

Conor Madden nailed another point from play from close range, and then Adam Kirwan grabbed his first from play. Sean Fitzpatrick finally got Borris-Kilcotton on the scoreboard, but Niall Sinnott raised two more white flags for Trumera in response.

Stephen Campion showed a nice burst of pace for Borris-Kilcotton before firing over the bar, but his side had already hit five wides in the opening quarter. They trailed 0-2 to 0-7 at that stage and the slow start, as well as the poor wides, proved devastating to their hopes of winning this one by the end of it.

Paddy Hosey placed over a nice score as play resumed for Trumera, before Eoin Fitzpatrick replied for Borris-Kilcotton. Niall Sinnott and Sean Fitzpatrick swapped points from frees, by Trumera would string together three scores before the end of the half.

Sinnott sent over two more points from places balls, while Paddy Hosey pointed his second score in between. Trumera held a commanding and well-deserved 0-12 to 0-4 lead at half-time.

Borris-Kilcotton landed the opening two scores of the second half to make it a six point game. Eoin Fitzpatrick and Sean Fitzpatrick pointed one each for them, before Trumera full-forward Cathal Brophy knocked over his first score.

Borris-Kilcotton kept plugging away though, with Brian Stapleton, Sean Fitzpatrick (free) and Stephen Campion raising more white flags for them. Trumera replied well to this though, as Adam Kirwan and Niall Sinnott kept them ticking over.

Brian ‘Butch’ Stapleton landed two fine scores for Borris-Kilcotton in the third quarter, and with Bill Meade also pointing from a free, they had cut the deficit back to five points during the second water break.

Two converted Sean Fitzpatrick frees at the start of the final quarter left just the goal in it. Kirwan responded with a free for Trumera, but Borris-Kilcotton centre-back Bill Meade stepped up to score a lovely effort to keep just three between them.

However, Conor Madden and Kirwan (free) put over crucial scores near end for Trumera to give them a bit of a cushion. Borris-Kilcotton went in desperate search of a goal to give them a lifeline towards the end, but Trumera made sure they had bodies back to stop any threat coming through the middle.

Referee Alan Doheny from Castletown blew the whistle for full-time, and Trumera were officially back in the Intermediate showdown once more. After suffering a big defeat to Rathdowney-Errill’s second string in the 2020 county final, Trumera will be hoping to be far more competitive this time around, but Clough-Ballacolla will provide another stern test for them.