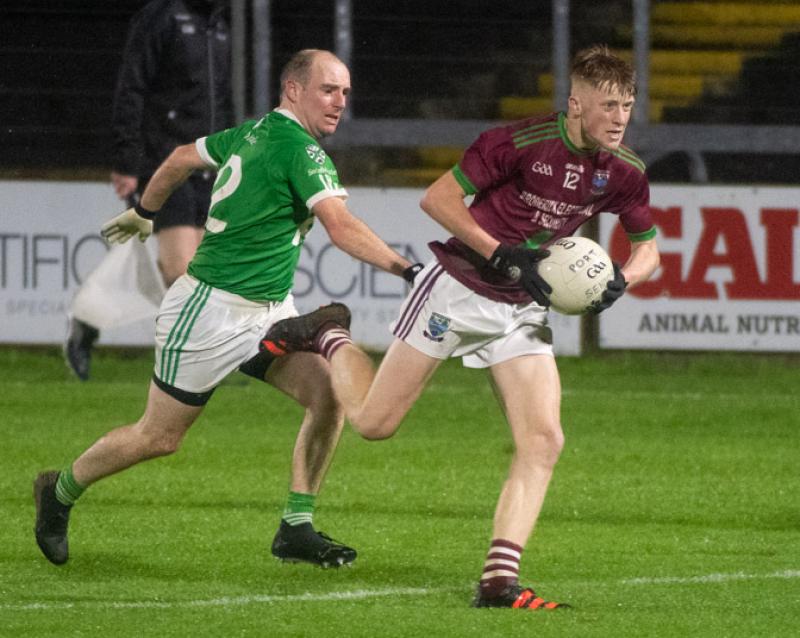 The reigning Laois Senior football county champions, Portarlington, booked their place back into the last four of the competition thanks to a comfortable enough victory over Stradbally.

Portarlington's defence was the catalyst for their win here, as their whole back line and midfield worked in tandem to keep Stradbally to only eight points. With Colm Murphy and Jake Foster kicking eleven points between them, Portarlington had eight points to spare over Stradbally in the end.

Stradbally opened the scoring in O'Moore Park through the impressive Eoin Buggie, who found the posts with a nice score off his right boot. It took the reigning county champions, Portarlington, five minutes to find their groove. They did get on the the scoreboard though through Colm Murphy, as he used his strength to fire over after a lovely, low pass from Portarlington centre-forward Ronan Coffey.

Podge Fitzpatrick regained the lead for Stradbally after showing a low centre of gravity to drift past a few tackles and split the posts. Portarlington responded well though, with Jake Foster squeezing over a score before Ronan Coffey blasted over another from close range.

Eoin Buggie levelled for Stradbally through a placed ball, but Portarlington kicked the last two score of the opening quarter to take a narrow lead during the first water break.

Again, it was Ronan Coffey who was pulling the strings for the first of those two points, as David Murphy latched on to a pass from Coffey and fired over the bar. Colm Murphy landed another lovely effort, as Portarlington led 0-5 to 0-3.

Portarlington began the second quarter on fire. Adam Ryan, Colm Murphy and Rioghan Murphy all raised white flags for them to extend their advantage out to five points.

Stradbally responded well with scores from Garry Comerford and Conor Goode, but Portarlington finished the half strongly. Jake Foster and Colm Murphy both landed scores, before Portarlington were awarded a penalty after Adam Ryan was dragged back in the square by Damian Murphy.

Ronan Coffey stepped up to take the penalty, but Wayne Comerford did magnificently to get down low to his right and save. However, the Portarlington goalkeeper charged up the field to slot over the resulting 45' from that save.

Jake Foster landed another point off that trusty left boot for Portarlington, before Eoin Buggie converted another free for Stradbally. This left Portarlington ahead 0-12 to 0-6 at half-time.

Colm Murphy popped over the first point of the second half from a free, and then Jake Foster converted another from a placed ball situation. Tom Shiel was introduced for Stradbally for his first game of the year by Greg Ramsbottom, and that move paid off immediately as he slotted over a free from a long way out.

Stradbally were defending strongly in the third quarter, but kicked five bad wides up front and Portarlington remained comfortably seven points ahead because of it. In fairness to Martin Murphy's men though, their full-back line of Cathal Bennett, Diarmuid Bennett and Alex Mohan put the Stradbally forwards under serious pressure.

We had to wait until the 55th minute for the first score of the final quarter, as Stradbally could not find a way through the packed Portarlington rearguard despite a lot of possession. Foster popped over a free down the other end after he won it himself.

Stradbally grabbed the last score of the game through Tom Shiel, as he converted another free, but the only other notable event was a bit of a scuffle towards the end where John Flynn dished out a couple of yellow cards.