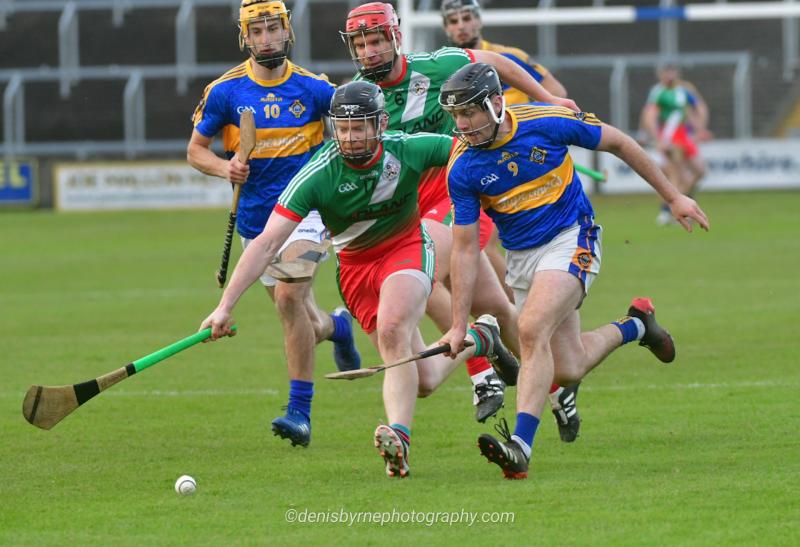 Clough Ballacolla claimed back to back senior hurling titles for the first time in their history on Sunday as they edged out Borris-Kilcotton in an epic battle.

Clough-Ballacolla came back from being seven points down at half time with a virtuoso second half performance to clinch the title.

Stephen Maher was once again to the fore with 14 points while man of the match Willie Dunphy hit five points from play. Borris-Kilcotton have now lost two finals in under three months to Clough Ballacolla and it was a tough one for them to take.

Borris-Kilcotton raced out of the traps and really put their stamp on the game early on. By the eighth minute the led 0-6 to 0-0 as they blitzed the Clough-Ballacolla men.

PJ Scully opened the scoring before adding a free during that early purple patch with Aaron Dunphy landing two while Joseph Campion and Daire Quinlan also opened their accounts.

Clough-Ballacolla eventually got off the mark with Willie Dunphy grabbing a score from under the stand but Borris-Kilcotton didn't let up. Joseph Campion got his second of the game while at the other end, Clough Ballacolla's ace marksman Stephen Maher got his first score of the game to leave it 0-7 to 0-2 after 11 minutes.

Aaron Dunphy was a man on form with his pace and power causing havoc. Two PJ Scully frees just before the water break left the Borris-Kilcotton men 0-9 to 0-2 in front at the end of the opening quarter and with a stranglehold on the game. Stephen Maher was keeping Clough Ballacolla in touch from placed balls, he added five in the space of seven minutes but PJ Scully was also taking no prisoners from frees as his side still held a healthy 0-12 to 0-7 lead after 24 minutes.

The remainder of the opening half saw Clough-Ballacolla grow into the game after their stuttering start. Points from Aidan Corby, Stephen Maher and a monster score from Willie Hyland saw them close the gap to 0-12 to 0-10 with two minutes left in the half but there was to be more drama.

PJ Scully restored a three point lead for Borris-Kilcotton before they struck for goal. Noah Quinlan played in a delightful ball to Daire Quinlan and after he made space for himself, he send a shot to the net to give his side a real tonic just before half time.

Aidan Corby had a great goal chance at the other end with the next attack but a brilliant flick from Philip Tynan denied the midfielder from rattling the net.

Colm Stapleton added another score in stoppage time to leave Borris-Kilcotton cruising at half time 1-14 to 0-10.

The second half got off to an explosive start. With nothing being spared in the physical stakes, Clough Ballacolla found the net with the opening score of the half. Darren Maher drove a long free out of the backline and as it broke 25 metres from goals, Stephen Bergin picked up the break, soloed through and found the net from close range.

Stephen Maher then landed two frees from inside his own half and a seven point deficit was now down to two - 1-14 to 1-12.

In total, Clough-Ballacolla hit 1-4 in succession at the start of the second half to bring it back level. Lee Cleere pointed from distance to leave one between them before Stephen Maher, this time from play, levelled the game on 38 minutes.

Scully and Maher exchanged frees before Borris-Kilcotton hit the front again. Aaron Dunphy did well to cut on from the wing, he found Stephen Dunphy in space and the corner forward made no mistake in rifling to hr net to make it 2-15 to 1-15.

Again, Stephen Maher and PJ Scully exchanged placed balls before Maher landed another from play to leave it 2-16 to 1-17 with 44 minutes gone.

PJ Scully landed his tenth of the game just before the water break as Borris-Kilcotton held a three point lead coming down the final stretch.with nine minutes to go.

The final quarter was pulsating. Willie Dunphy sent over a superb point from a tight angle while another Stephen Maher free had it back to a one point game. Stephen Dunphy relied for Borris-Kilcotton before Clough-Ballacolla rattled off the next four scores in the space of three minutes with Willie Dunphy landing two of those with one as good as the other.

That put them two in front as the minutes ticked down before points from Neil Foyle and PJ Scully brought Borris-Kilcotton back level on 59 minutes.

The drama continued with Lee Cleere landing a brilliant score on 60 minutes only for PJ Scully to fire over a free from inside his own half to square things off again.

Then with 63 minutes on the clock, Stephen Maher put over the game winning score from a free as Clough Ballacolla rejoiced with their first ever back to back titles.