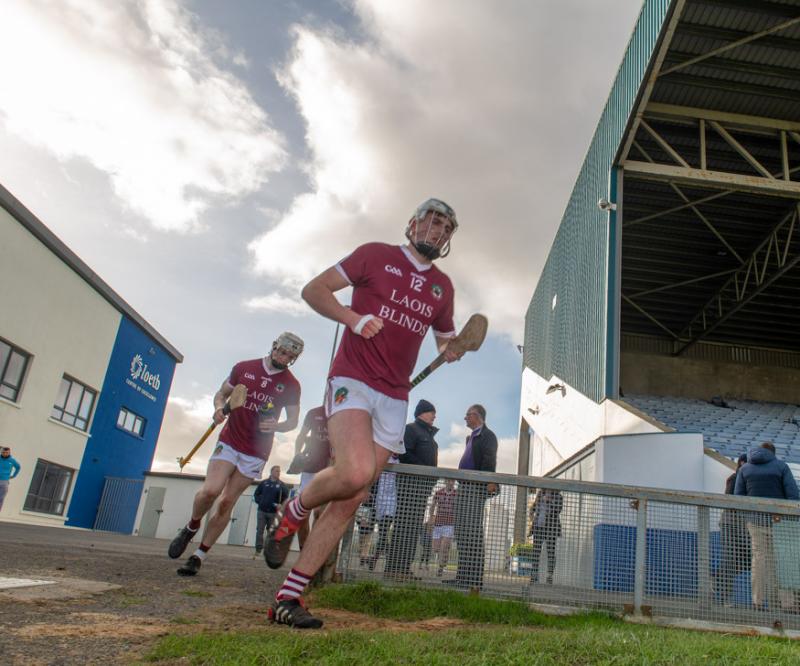 With 25 minutes to go, it looked like a big shock was on the cards as Ballinakill led Glenmore by a point but a strong final 20 minutes from the Kilkenny Intermediate champions saw them produce their best hurling over the hour to ultimately end Ballinakill's Leinster run.

Ballinakill were more than a match for them and the scoreline in the end flattered the Kilkenny men who had the likes of Ger Aylward, Eoin Murphy and Alan Murphy in their ranks, all three with All Ireland medals for Kilkenny in their back pockets.

On a bitterly cold day in Abbeyleix, the Ballinakill men went into the game as rank underdogs and the opening 15 minutes of the game didn't do anything to make you think otherwise.

Glenmore raced into a 0-5 to 0-0 lead with Alan Murphy nailing two frees and the dangerous Ger Aylward also landing two from play.

Ballinakill were playing against a strong wind in the opening half but they were struggling for possession as the Glenmore men started at pace.

TJ Lalor eventually got the Laois Premier Intermediate champions off the mark in the 15th minute with a free and while he added another shortly after, a long range effort from Kilkenny senior goalkeeper Eoin Murphy, who lined out at centre back, had the Kilkenny men leading 0-7 to 0-2 at the first water break.

Ballinakill gathered themselves for the second quarter and began to eat into the lead. Jamie Drury and Lir McDonald both popped over neat scores and now playing with more confidence, Glenmore were getting their fill of it.

The gap was down to three points just before half time after Cian O'Shaughnessy floated over an excellent point and TJ Lalor followed up with his third free to leave it 0-9 to 0-6.

It stayed like that until half time and having played against the wind, they would have gone in at half time happy with their response to their slow start.

Noel Duggan got the opening score of the second half to make it a two point game and with only four minutes gone in the second half, they struck for goal with Cian O'Shaughnessy reacting well to a loose ball and firing home from close range.

Having trailed by three at half time, Ballinakill were now a point up and dreaming of pulling off the shock.

While Ballinakill kept up the tempo, that goal also seemed to awaken Glenmore from their slumber. Alan Murphy had them back in front by the 42nd minute with two dead balls as Ballinakill's scoring dried up.

Ger Aylward slotted another point while Murphy continued to nail the frees. Coming up to the second water break, the Kilkenny men led 0-14 to 1-7 but Ballinakill were then hit with a real hammer blow just before that break when substitute David Burke got in for a goal leaving the Laois men seven behind with 15 minutes to go.

Ian Shanahan popped up with a much needed score, their first in over 10 minutes and further scores from Sean Downey and TJ Lalor got them back to a five point game - 1-15 to 1-10 with just under 10 minutes to go.

You probably couldn't have argued with a five point margin at full time but in typical Kilkenny style, they kept the hammer down with Ger Aylward getting in for their second goal five minutes from time.

Sean Downey drove over a late free when he was going for the goal but it was all in vain as the Kilkenny champions marched on and brought the curtain down on what has been a great year for the Ballinakill men.