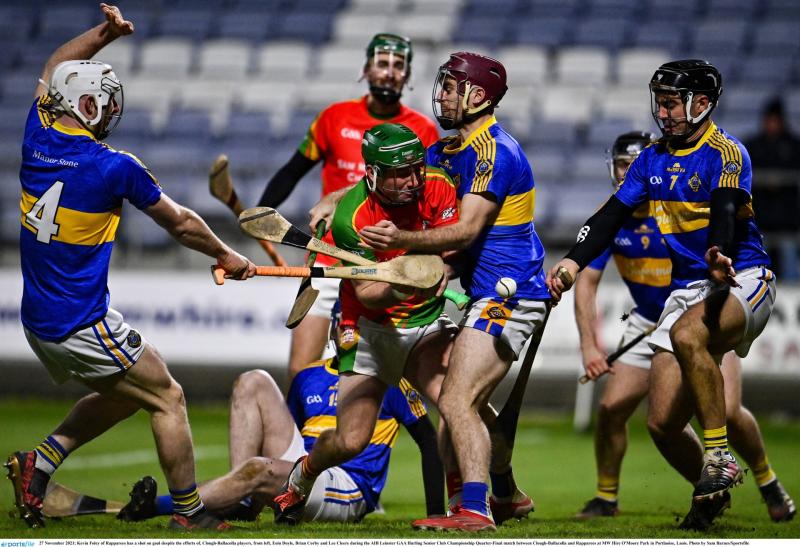 Clough/Ballacolla booked their place in the Leinster semi-final with an impressiVE eight point win over Rapparees of Wexford at a bitterly cold Portlaoise on Saturday evening. A Stephen Maher goal one minute into the second half was the difference between the sides as Clough Ballacolla finished strong to progress.

Rapparees did get the game back to a one-point game midway through the second half, but Clough Ballacolla shot the last seven points of the game, which included five Maher frees and it was enough for the Laois side to advance to the semi-finals.

It was a scrappy start to the game, and with both sides deploying a sweeper, they enjoyed plenty of
turnovers in the early exchanges. Oisin Pepper almost rattled the back of the net inside the first 90 seconds when he turned Eoin Doyle and powered past him, but his attempt dribbled harmlessly wide.

He redeemed himself one minute later when he fired over from distance to open the scoring. Jack Kelly doubled the Rapparees
lead seconds later when put over a fine point from a tight angle on the left.

Stephen Bergin opened Clough Ballacolla’s account for the day five minutes in but Rapparees responded with a point through Ryan Mahon. Willie Hyland and Stephen Maher both pointed for the Laois men but a Ryan Mahon free just before
the water break gave Rapparees a lead by the minimum at the stoppage.

The second quarter began just how the first quarter had ended with another Mahon free from distance. Stephen Maher registered his first free of the day after Mahon’s attempt, but three Rapparees points, two from Mahon and a fine Oisin Pepper point gave them a four-point lead as we approached half time.

It looked as if Rapparees would carry a significant lead into the break, but Clough Ballacolla rallied, and they shot over four on the trot to level the game. 2021 Laois Senior Hurler of the year, Willie Dunphy fired over the last point of the half from a tight angle to leave it eight points a piece at the half time whistle.

It looked as if the half time whistle had come at the wrong time for Clough Ballacolla as they had just gained serious momentum, but they continued that momentum immediately after. They got their dream start to the half when Maher pounced on a loose ball in the Rapparees rectangle, and he skilfully flicked the ball over a helpless Anthony Larkin to raise the only green flag of the game.

It gave Clough Ballacolla a three-point lead after the break but Rapparees plugged away and they had the lead down to a point by the 41st minute courtesy of another Mahon frees and a point from James Peare. They did have a chance to go ahead but two wayward frees from Ryan Mahon and Tomas Mahon left them a point behind.

A monster point from Willie Hyland left the Clough Ballacolla lead at two points at the second water break. Kevin Foley reduced it to a single point when he magnificently plucked a long Liam Ryan free from the air, turned and pointed. The umpire had waved it wide, but his decision was overruled by the linesman and the point was awarded.

With the game now in the melting pot, it was the Clough Ballacolla men who took it by the scruff of the neck. Two Maher frees and another Willie Dunphy point gave them a healthy four-point lead with just four minutes left to play. Clough Ballacolla finished strongly, and they powered to victory. Maher fired over a couple of frees and substitute Cillian Dunne had the last say as his point at the death helped Clough Ballacolla to a convincing eight-point win.

Up next for the Laois champions is a tie against either Raharney or Kilmacud Crokes who will clash on Sunday in Mullingar.