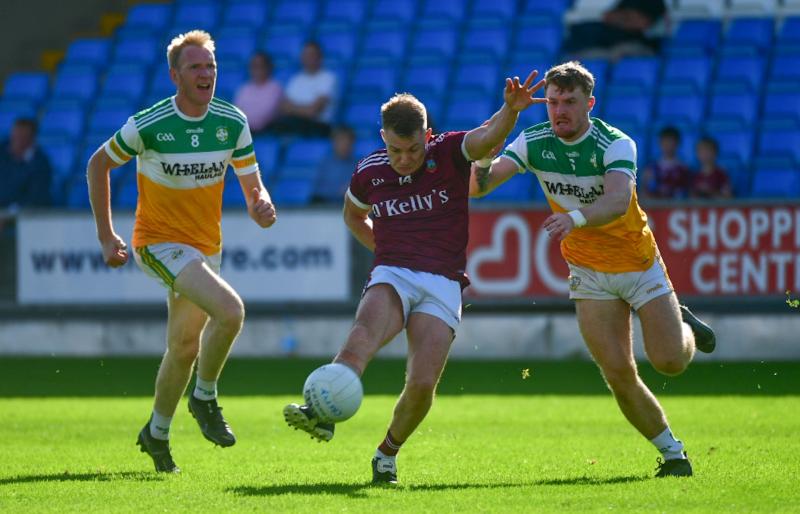 Rivals Arles-Kilcruise and Crettyard clashed in O’Moore Park where a place in the Intermediate football championship final against The Heath was at stake.

Crettyard were in the Intermediate final in 2020, but they were shell-shocked by Clonaslee St Manman’s that year, While Arles-Kilcruise lost to eventual champions Park-Ratheniska narrowly in the semi-finals last season after suffering relegation from Senior ranks the year previous.

However, Crettyard’s main man, Evan O’Carroll, was unable to start due to a hand injury. While he came off the bench and scored 1-2 in the second half for his side, Arles-Kilcruise proved to be the better outfit here.

Liam Whelan came off the bench for Arles-Kilruise to grab a crucial goal, as they booked their spot against The Heath in the 2022 Intermediate football final.

Arles-Kilcruise were on the front foot early on in Portlaoise. Midfielder Jamie Conway landed their opening score after Crettyard’s defence failed to deal with a high ball into the square.

Wing-back Caomhan Brennan then burst up to launch over a beautiful outside of the boot score to double Arles-Kilcruise’s advantage. Crettyard replied with their first point through a Brian Brennan free.

Arles-Kilcruise kept the pressure on though in the opening quarter. Ross Munnelly and David Conway both popped over a free each to extend their advantage out to three points early on.

Crettyard scored their first point from play through midfielder Cormac Murphy, who managed to fire one between the posts despite falling off balance. Arles-Kilcruise were looking more clinical up front though, as Fran Egan kicked over an easy point following good work from Ross Munnelly.

David Conway then came alive, with the former Laois inter-county player kicking two points for Arles-Kilcruise. The first from Conway was a score that just crept under the crossbar, while the second came from capitalising on a poor Crettyard kickout.

However, Crettyard brought the game to life following a goal in the seventeenth minute. They managed to turn over Arles-Kilcruise close to goal, with Crettyard full-forward Jonah Kelly’s shot trundling past Jamie Coogan and into the net.

Brian Brennan brought the deficit back to the minimum thanks to converting a free for Crettyard. They could have grabbed a few more scores after that, but they hit some lacklustre wides during this crucial spell in the match.

David Conway got Arles-Kilcruise back on the scoreboard with his fourth point of the first half. Cormac Murphy responded for Crettyard to cut the gap back to a single point, as he curled over a free off the ground.

That proved to be the final score of the opening half. Arles-Kilcruise led 0-8 to 1-4 at half-time, but it appeared that Crettyard had the momentum going into the second half. When Evan O’Carroll was introduced for the second half off the bench, you fancied Crettard even more.

However, Arles-Kilcruise carved out a goal opportunity upon the resumption as they caught Crettyard napping. Fran Egan and Caomhan Brennan combined to send Darrah Kealy straight through on goals, but his shot was brilliantly tipped over the bar by Crettyard keeper Josh Kelly.

Five minutes later and it was Arles-Kilcruise who extended their lead. Ross Munnelly received the ball and swiftly turned on to his left to fire over the bar.

Josh Kelly was forced back into action in the Crettyard goals, as this time he denied David Conway. However, Aodhan Lowry stepped up to convert the resulting 45’ for Arles-Kilcruise.

Ross Munnelly landed his third score from a free after that. Crettyard finally got on the scoreboard for the second half through a Brian Brennan point from a placed ball.

Half-time substitute, Evan O’Carroll, then reduced the gap back to three points through another free. With fifteen minutes remaining, the match was still there for either side.

Crettyard almost had a goal when Patrick O’Reilly cut his way through the heart of the defence. However, Arles-Kilcruise keeper, Jamie Coogan, managed to get a hand on the effort to deflect it wide.

They did get their goal though moments later. A pacy counter-attacking move started by Ciaran Burke finished with Evan O’Carroll crashing a shot into the bottom left-hand corner of the net.

However, Arles-Kilcruise struck straight back with a goal of their own to re-take control. David Conway and Darragh Kealy combined to put substitute Liam Whelan in, and Whelan managed to get enough contact to finish it home.

While Crettyard tried hard in the final period of the match, they were unable to work a goal. Evan O’Carroll palmed a long ball in off the post, as Arles-Kilcruise survived to book their place in the Intermediate final.