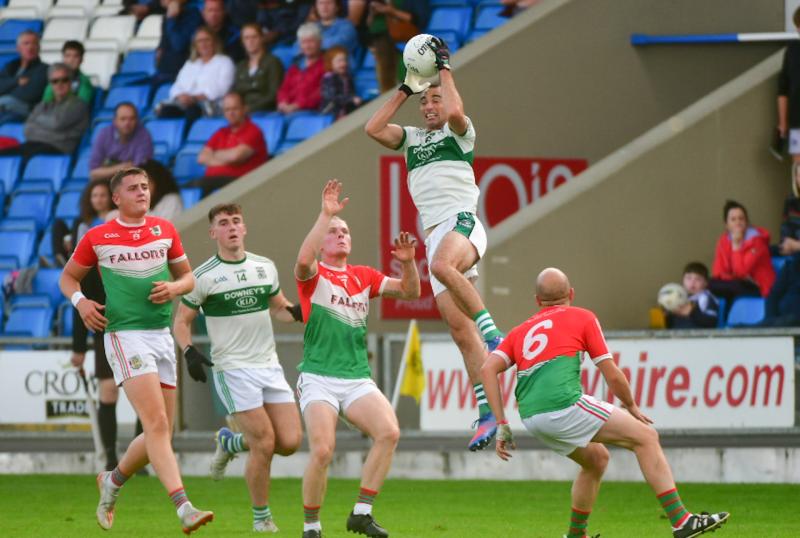 The match played out as expected really. Portlaoise proved too slick in the first half and kept Clonaslee St Manman’s to just a single point. While the second half was more competitive, Portlaoise always had too much for their opposition here.

It was all Portlaoise in the opening stages. Kieran O’Donnell settled ‘The Town’ men into this one nicely by slicing over a 45’, while the experienced Paul Cahillane doubled their lead with another point from play.

Portlaoise made it three points in a row soon after. This time it was Chris Finn who made his way up from wing-back to curl over after patient build-up play from the Portlaoise side.

Clonaslee St Manman’s keeper Barry Kelly was forced into action in the first ten minutes. Ricky Maher managed to find room to get a shot off, but it was straight down the throat of Kelly and he cleared.

Nevertheless, Portlaoise continued to dominate. Jason Maher managed to find a gap and place over under pressure to put them four points to the good, with Clonaslee St Manman’s barely having had a kick of the ball at this stage.

Niall Corbet duly obliged as well, as he made no mistake with the free to get his team on the scoresheet. Portlaoise responded straight away though, with Ricky Maher firing over a bullet from distance with the outside of his boot.

Portlaoise had another half-goal chance in the twenty-first minute. A long ball was sent into Ciaran McEvoy, who broke it down for himself. McEvoy swung a boot at it but Barry Kelly got down well to deny.

Kevin Fitzpatrick’s team proved undeterred though, as David Holland added their sixth point of the day. Clonaslee St Manman’s had all fifteen men behind the ball several times, but Portlaoise were patient and worked their chances well.

Ricky Maher kicked Portlaoise’s seventh point of the match through a placed ball, and then moments later Maher fired over their eighth with another fine effort from play.

Clonaslee St Manman’s had a chance to grab the final score of the half, but Niall Corbet’s effort from a free trailed to the right and wide. They trailed 0-1 to 0-8 at half-time here, with Portlaoise well on their way to the semi-finals already.

Niall Corbet atoned for his miss in the first half by slapping over a beautiful free from outside the 45’ mark. That seemed to breathe some life into Clonaslee St Manman’s, as they began to attack Portlaoise and not just stand off them like the first half.

Corbet placed over another point from a free, this time a lot closer to the goal. Then a ball was played out to Corbet at the right-hand wing, but there was no support help.

However, despite being surrouned by two Portlaoise defenders, Corbet managed to take it past them both and fist over from close-range for a remarkable score. Suddenly, the gap was back to just four points and the atmosphere had changed.

Portlaoise were poor in the opening ten minutes of the second half, but Ricky Maher stepped up to settle them down. The corner-forward kicked two points, one from play and one from a free, to bring his tally to five points for the day.

Clonaslee St Manman’s continued to plug away, with Josh Flynn and Niall Corbet (free) cutting the gap back to five points. However, Portlaoise’s fresh legs off the bench made an impact to help them comfortably kick on to victory.

Unfortunately, the game ended on a sour note following a red card. Seamus Rosney, a substitute for Clonaslee St Manman’s received his marching orders near the end.