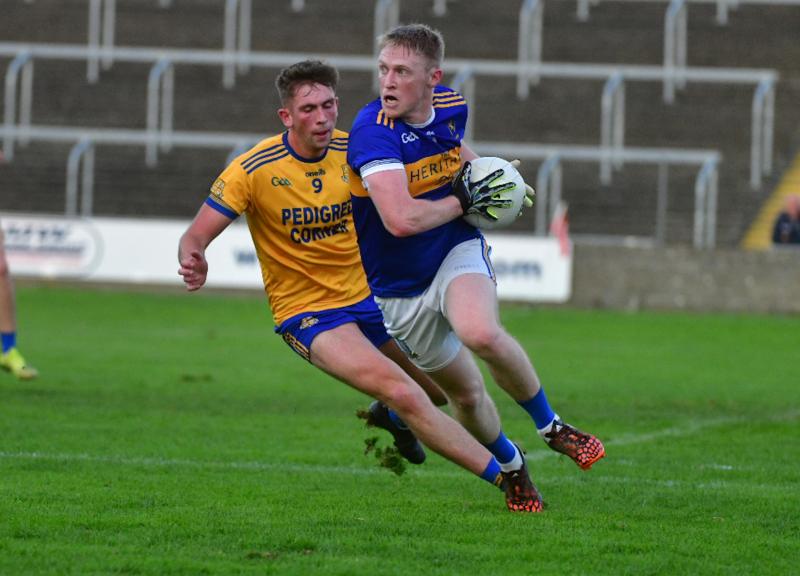 O’Dempsey’s and St Joseph’s met in the final match in O’Moore Park on Saturday evening, with a cracker of a contest expected to unfold. St Joseph’s have won the Kelly Cup and Division 1A league this season, while O’Dempsey’s had run reigning champions Portarlington close in round two.

St Joseph’s were without their main man, Eoghan O’Flaherty, from the start here. While O’Dempsey’s Eoin Finlay, who had been scoring heavily in previous rounds, was also replaced in the programme.

It looked like it was going to be St Joseph's going through here with five minutes of normal time remaining, but the fourteen men of O'Dempsey's had other ideas. A goal from substitute Eoin Finlay, along with a late flurry of points, ensured that Eoin Kearns' side advanced.

O’Dempsey’s most experienced man on the field, Michael Finlay, opened the scoring for the Killenard outfit with a point with his trusty left boot. St Joseph’s wasted no time in replying though, as Dylan Doyle raised their first white flag.

Despite O’Dempsey’s looking the better team in the opening stages here, it was St Joseph’s who grabbed the game’s first goal. Brian Daly caught a ball just inside the square brilliantly and was subsequently brought to ground by O’Dempsey’s Daithi Howlin.

Brian Daly stepped up to take the spot-kick that he earned and calmly placed it to the right corner of the goals, giving Padraig Bannon no chance. However, O’Dempsey’s went down the other end to get a goal back immediately.

It was a superb team goal in truth. A pacy move involving Jack Lennon, Barry Kelly, and Matthew Finlay resulted in Michael Finlay palming home to an empty net.

Matthew Finlay added a free to the goal for O’Dempsey’s, but St Joseph’s would grab the next two scores to edge back ahead. Brian Daly placed over an easy point under no pressure, and then Daly landed another from a placed ball.

O’Dempsey’s were awarded a penalty shortly after that though to swing the momentum once more. Michael Finlay saw his first shot expertly saved by Aaron Cooney in the St Joseph’s goals, but referee Maurice Deegan deemed that Finlay was fouled when he tried to secure the rebound.

Mark Barry calmly stepped up to slot home the resulting penalty and hand O’Dempsey’s the initiative once more. Matthew Finlay popped over another free shortly after to extend their advantage to a goal.

While Brian Daly replied with a point from a free, O’Dempsey’s registered the next two scores. Barry Kelly sauntered forward to float over a beauty, while Matthew Finlay converted another placed ball.

St Joseph’s would grab the final score of the half. Brian Daly was doing everything in the first half, as he managed to keep the ball in play and curl over a crucial score before half-time.

O’Dempsey’s held a 2-5 to 1-5 lead at the half-time interval, with that penalty call proving the difference at this stage of the match.

In a game of huge incidents, there was another massive call upon the resumption of play. Cormac O’Hora blatantly brought Dylan Doyle to the ground running through, and Maurice Deegan flashed a black card.

However, O’Hora had picked up a yellow in the first half as well which meant a red card was flashed his way. O’Dempsey’s were now down to fourteen men for the remainder of the affair.

St Joseph’s had momentum now and Brian Daly was in flying form. He kicked the next two scores, one from a free and one from play, to leave the minimum separating the sides.

That red card had changed the complexion of the contest, as St Joseph’s were completely dominating now. Michael Keogh, who had been well marshalled up to this point, curled over a delightful score to level the teams.

While Mark Barry managed to grab O’Dempsey’s first score of the second half through a free, Brian Daly once more hit back for St Joseph’s. Danny Hickey kicked another for St Joseph’s, but Mark Barry replied with a free.

It was still all to play for in the last ten minutes, but St Joseph’s having the extra man made the difference. Cormac Murphy booted over a monster score to edge them in front, before Michael Keogh added two more points for the St Joseph’s men.

However, O’Dempsey’s refused to give up. Michael Finlay tried a shot from distance, and substitute Eoin Finlay managed to punch home the ball that dropped short in the square.