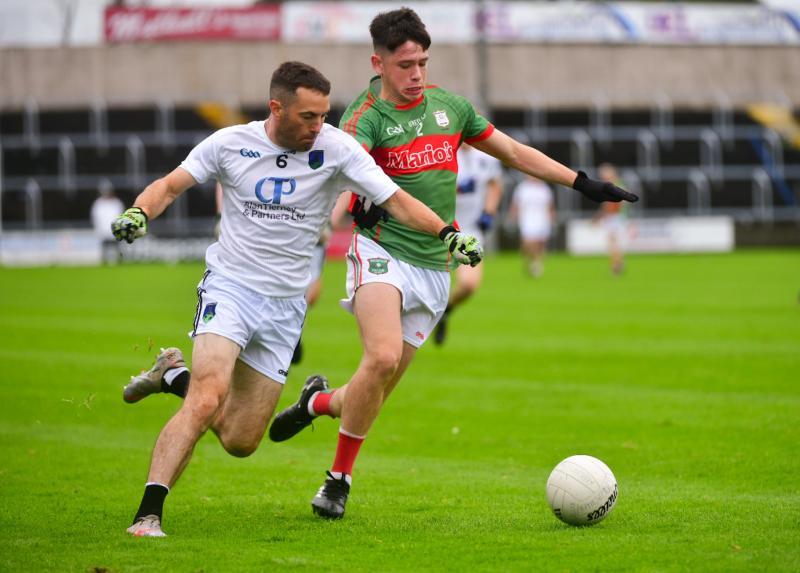 Graiguecullen came into this quarter final as hot favourites having impressed in the opening rounds. Courtwood despite being relatively weaker and considederd luky to get to this stage, had other ideas.

Danny Bolger opened the scoring for Graiguecullen from a dead ball within two minutes and then soon after got his second.

Courtwood were caught on the break then after sending numbers forward, the ball was turned over. Graiguecullen attacked at pace and Jamie Sheehan laid it off for Jack Byrne who converted Graiguecullens third score.

After a Courtwood free dropped short Graiguecullen again attacked at pace, this time it corner forward Brian Byrne who found himeslf in the danger area and was dragged down for penalty. Mark Timmons put the resulting spot kick wide of the left post.

Graigue won the kickout though and a subsequent free. Conor Kelly converted to put them 4 points to no score up after 15 minutes.

On 18 minutes Courtwood finally got off the mark. A misplaced goal kick led to Paul O Flynn opening the scoring. Sean O Flynn got their second almost immediatly after.

Niall Donhor had a fantastic chance after a a fantastic run saw him clean through on goal, his effort came straight back off the bar

Conor Kelly got his second and third poibt to put 4 between them. Just before half time Danny Luttell coverted his first free to bring it back to three. Half time score Grauiguecullen 0-6, Courtwood 0-3.

The first half was really end to end stuff, despite the relatively low scoring. You could sense a little bit of niggle and there always seemes to be two lads going at each other off the ball at all times. Graiguecullen looked to be the more composed and relaxed of the two teams despite missing three or four scorable chances. Courtwood had got themsleves in really good positions but wern't cliical enough in the early stages.

Early in the second half Danny Ailsbury was caught out in posession. Courtwood turned it over and sent the ball into Niall dunne who raised the green flag for the men in white to level the scoring.

Grauguecullen responded with two points from Byrne and Kelly.

The game was very stop start for the next while. The slippery conditions contrubuting to a lot of fouling and the teams trades a couple of dead ball scores. As we headed into the last 15 minutes. Graguecullen held a 2 point lead.

With 8 minutes left on the clock, Courtwood goalkepper Mathew byron put one between them. Sean O Flynn got his second immediately after and once again Courtwood won the kickout and Sub Dylan Keane put them in front for the first time

Grauguecullen again lost the kickout for the fourth time in a row which resulted in Niall Dunne being clean through and hitting the post. The ball came back out to Niall Donnaher who converted to put Courtwood two points up with 5 minutes left. This momentum shift within two minutes effectively decided the game

Kean then put three between them which would ultimately seal the game for Courtwood.

A shock upset in what appeared to be on paper to be one of the more straughtforward ties of the quarter final.

Grauguecullen were 1/7 favourites for the game. All credit to Courtwood though theh kept in touch throughout the game and at the most important period of the game they took their chances. Courtwood advance and they advance to the quarter finals. Graiguecullen will have to wait another 12 months for a crack at the Delaney cup.