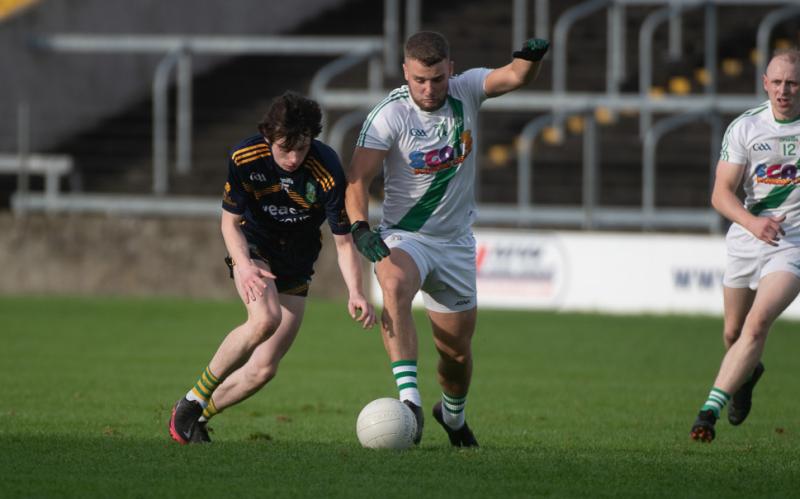 After a horrific injury brought this fixture to an early conclusion last Wednesday. Killeshin and Ballylinan took to O’Moore park once again to battle it out for senior status in 2023. The game would be the last senior fixture of the bumper-packed weekend.

Evan Lowery opened the scoring for Killeshin followed up by a wonderful mark from Ross Bolger which he converted to give Killeshin an early two-point lead. The game was being dictated by Killeshin in the early stages and an Eoin Lowey free and an Adam Deering point put them four points up.

Ballylinan then had a goal chance through a Ryan Brady laying it off for Cathal Dunne but Dunnes shot was saved by Killeshin Keeper Killian Roche. Ross Bolger immediately after got his second point and stretched Killeshin’s lead to five points. Roche then made it six two minutes later from a 45 and things were looking ominous for Ballylinan after only fifteen minutes

Ballylinans defence continued to struggle and points from Deering and Roche put Killeshin eight points to no score up. Ballylinan eventually got off the mark after 26 minutes thanks to a well-taken point from Gary Walsh.

Killeshin immediately responded with an Eoin Lowry before half-time Eoin Brennan received what appeared to be a harsh black card. This didn’t stop the Killeshin Momentum though as Ross Bolger slotted over Killeshins tenth point. Ryan Brady gave Ballylinan their second point and in fairness, he looked to be the Ballylinan man who was interested in the game.

Killeshin went in at halftime with a nine-point lead and were really in cruise control after an abysmal first-half display from Killeshin. Ross Bolger was having a cracking performance for Killeshin and looked unmarkable. It was very hard to see a way back for Ballylinan

Killian Roche opened the scoring in the second half to give Killeshin a double-figure lead. One of Ballylinans best players last week Ryan Dunne got a fist to a long ball and sent it over the bar before Liam Kealy got their fourth.

Referee Seamus Mulhare was kept busy as a few hard tackles and off-the-ball incidents began to creep in. Alan Farrell got Ballylinans sixth point before Ryan Dunne showed a little bit of the magic he had on display last week by catching a cracking mark. He duly converted to make it a five-point game. Killeshin were feeling the heat.

Gary Walsh had an absolutely cracking goal chance with seven minutes left having played a lovely give-and-go with Ryan Brady. But he got under it too much and it sailed over the bar. Two minutes later Killeshin sub-Lee Dunne found himself in a similar situation on the other side of the pitch. His effort sailed wide. Lee Dunne was played through for the second time, This time he swiped at it on the ground but his soccer skills aren’t too hot either as he sent it wide.

After a brief period in the second half where it looked like Ballylinans might be getting back into the game, Killeshin put back on the burners and ran out easy seven-point winners in the end. For them, they can sleep easy tonight knowing that they will be playing at least another year at the top tier of Laois championship football. Unfortunately for Ballylinan Intermediate Football awaits them in 2023.