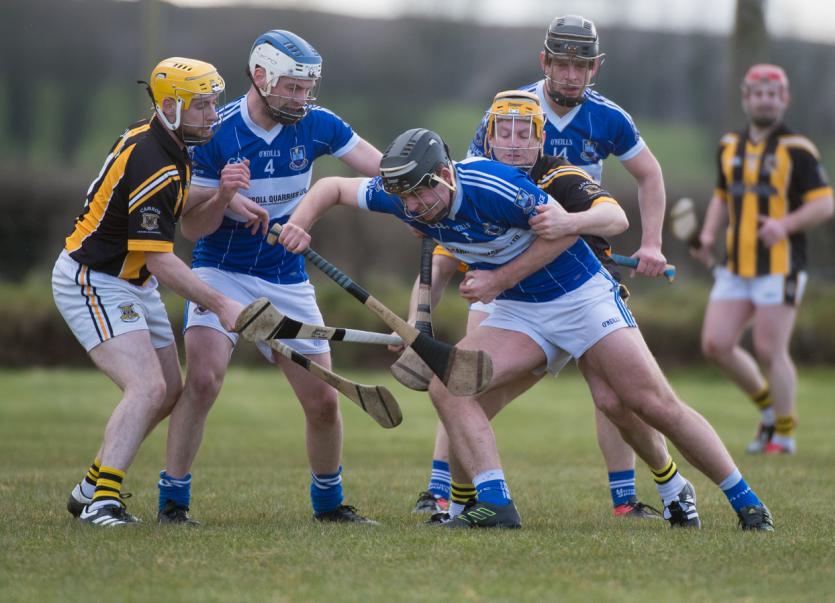 The reigning League and Championship holders, Camross, opened their 2018 League campaign with a comprehensive victory away to Castletown on Sunday evening.

Camross led by nine points at the break, 3-7 to 0-7, their three goals from Niall Holmes (2) and Dean Delaney separating the sides at John Lalor’s half-time whistle.

Second half goals from Zane Keenan and Ciaran Collier brought their tally to five for the day, and combined with a total of fifteen points, Manager Danny Owen’s will be encouraged with their scoring-return so early in the season.

The opening quarter of the game was tit-for-tat with Niall Holmes leading the line for Camross with 1-2, while Shane Phelan hit five points for the Castletown men with four of those coming from frees as they remained level on a scoreline of 1-2 to 0-5 with a tight encounter set to be on the cards.

Camross began to pull away before half-time as they outscored the home side by 1-5 to two points to lead the referee’s scorecard. Niall Holmes continued to terrorise the Castletown defence as he glided through to notch his second goal of the day, while Dean Delaney was on hand to rifle their third home.

Points followed from Holmes, Zane Keenan and Dwane Palmer as they took a commanding lead before the interval, while Phelan and James Hooban pointed for Castletown to narrow the gap to the three goals going in at the break - 3-7 to 0-7.

Things didn’t get much easier for Castletown in the second half. Five points on the bounce for Camross directly after the restart made the Castletown task all the steeper. Keenan (2), Palmer and Eoin Gaughan all lifted white flags for the Camross charge.

The final quarter perked up with Camross bringing their goal tally to five, while Castletown picked up some late scores. Camross finished strong with goals from Zane Keenan and Ciaran Collier to round-off the result as they secured a nineteen point win to sit second in the table after the opening round.

Next up for Camross they will welcome Borris-Kilcotton to their home turf, a side who agonisingly lost by a point to Clough-Ballacolla on their first outing. Castletown on the other hand will make the trip to take on a high-scoring Rathdowney-Errill side that picked up a twenty-four point win last time out.