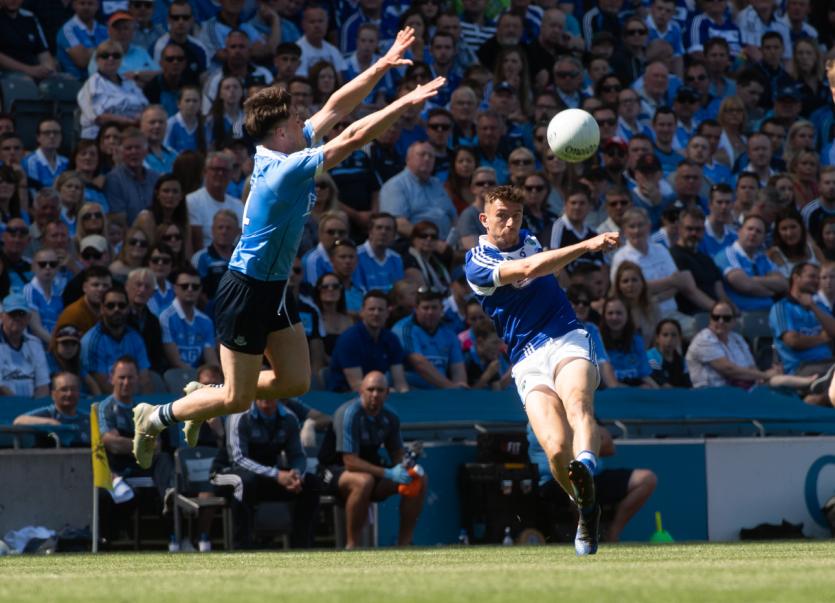 With a Leinster final appearance came a rare outing on live television for the Laois senior footballers, and the good folks of The Sunday Game didn't disappoint.

It is sometimes leveled at the panelists of the daytime show - Colm O'Rourke, Pat Spillane and Joe Brolly - that they're poorly researched and not really sure what they're talking about, and at times they did little to counteract that narrative.

I'll make an admission at this point, I rarely watch the Sunday Game, so I suppose I'm in the same boat as the lads to some degree. I'm usually either at a game during the day on a Sunday, or working on a Sunday night, so I never really get to see either variant of the Sunday Game. Suffice to say, watching back on the recordings, I wasn't left with the feeling that I had been missing out.

Brolly and Spillane act like two kids who have been drinking Fanta since they woke up. They blurt out whatever comes into their head whenever they feel like it, and there's an awful lot of them talking over each other. Joe likes to make faces too. He may even subject the other two to wedgies and purple nurples off air.

Brolly and Spillane act like two kids who have been drinking Fanta since they woke up.

The tail end of the Fermanagh-Donegal game consisted of mostly whinging, before they turned their attentions to Laois v Dublin. There was a solid enough opening, as they made valid points about Dublin's strategy of pushing up on opposition kickouts, and about the increased influence of Ciaran Kilkenny on the Dublin attack.

They started solidly, of course, because they were talking about Dublin. Next came an obligatory look at Laois, which is where things started to come off the rails a little bit.

“Colm, we've given you the task of looking at Laois” prompted Michael Lyster, to which Colm O'Rourke laughed. “It's all about Dublin, and the beginning of life after Cluxton, or A.C.” mused Colm, with a statement which made no sense then, or now.

Colm then cut to the chase, courtesy of a clip from the Laois-Westmeath game. “Laois have lots of good players, but they solo around and around and around out the field” opined Colm, and we were shown a video clip of Laois soloing the ball, before kicking it into Donie Kingston, who didn't win it.

A pity that was what Colm took from a game where Laois scored 4-12, were brilliant in the second half, and Paul Kingston scored a hat-trick. But the soloing obviously overshadowed all that.

“Against Carlow they scored twelve points, which was enough, but their movement was laboured” continued Colm, as Laois kept winning matches the wrong way, the swines.

His analysis was then brought to a shuddering halt by some breaking news from Michael Lyster. “Laois, I've noticed there gentlemen, have broken from the parade, and said to Dublin 'look, you go on with the parade, we'll go off and do something else'. It may not be a great idea” noted Lyster, having successfully decoded the motivation of all sixteen Laois men in the parade.

O'Rourke was equally taken with the gravity of what had just happened. “There's no point goring the bull” said Colm, knowing full well that Dublin were sticklers for parade etiquette.

Joe finished the pre-match on a positive note. “We will see again why we need a three tier system.”

The boys were back at half time, and they were happy now, and Colm explained why. “There was more kicking than normal” said O'Rourke, a man of simple pleasures. Pat liked that it was a contest and Brolly said Laois missed the best goal chance of the first half, despite Paul Mannion missing a penalty.

Then they turned their focus to Graham Brody, or lack of focus. Brolly delighted in Brody's 'insouciance' but said his forays out the field didn't really go anywhere, and they proceeded to show a clip where Brody helped moved the ball from a congested area of Dublin attackers, right across the field to where Laois had more space. Brody also played a direct role in setting up Laois' equaliser in the 17th minute. But still, it doesn't go anywhere.

Eventually it was all over, and Pat was upset that Dublin weren't celebrating Leinster championship victories as passionately as they were before. I suppose things go stale after a while.

That night, there was an even more terrifying and disturbing development for Laois supporters. Ciaran Whelan spoke in complimentary terms about the Laois team, and then criticized the referee for not giving Laois frees at crucial times.

This raises the very real possibility that Laois people could start liking Ciaran Whelan, a man we decidedly did not like for a long time. Before we know it, Bernard Brogan will get him down for the official opening of his new bar on Main St, and Wheelo will buy a free round for everyone. Then he'll say something disrespectful about Kildare, and we'll like him even more.

These are truly worrying times we live in.

Read also: Leinster Final Review - Our look back at the major talking points from the Leinster final