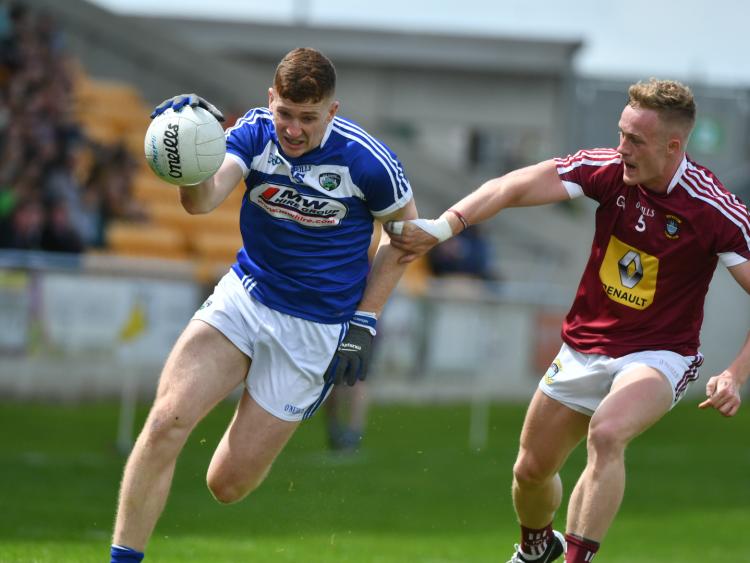 Laois survived a stern second-half comeback from Westmeath at O'Connor Park this afternoon to book their place in the Leinster semi-final with a narrow two-point victory.

Laois, aided by a considerable wind, went five points clear in the opening half while Westmeath laboured to open their account, taking until the twenty-third minute to register their first score. Westmeath came back in the second half and made use of the wind to outscore Laois by eight points to two to come within a a point a minute from time.

Scoring opportunities proved hard to come by for Jack Cooney's side in the opening thirty-five minutes, Laois defended collectively and broke down numerous Westmeath attacks before a threat could develop with some crucial interceptions from Paddy O'Sullivan, Colm Begley and a brilliant block in either half from Gareth Dillon.

Laois attacked from the throw-in and were awarded a free that Evan O'Carroll duly slotted. Paul Kingston followed with a great run before turning inside to his left to stroke over. Laois lost veteran full-back Mark Timmons to injury just eight minutes in, with Portarlington's Robbie Piggott replacing him.

O'Carroll sent over his second with a free from thirty metres after six minutes, and then Ger Egan had an opportunity to open the Westmeath account with a free from the edge of the D, but the Tyrellspass man uncharacteristically dropped his effort short.

Laois added another two points in the ten minutes thereafter, Paul Kingston's second with a great point from the right flank followed by an O'Carroll free after John O'Loughlin was fouled on route to goal.

Ger Egan slotted Westmeath's first point of the day from a close-range free, but O'Carroll returned it to leave the margin at five points.

Westmeath looked dangerous and when Sam Duncan looked to play in Noel Mulligan, Paddy O'Sullivan stepped in to make a vital interception.  Two minutes later Denis Corroon got close in on goal but opted to fist over, only for his effort to bounce back off the crossbar.

Westmeath added their second on the thirty minute mark through Egan's second after a foul on Ronan O'Toole, and Conor Boyle rounded off the half to see Laois take a six point lead to the changing rooms at half-time.

John Heslin reopened the scoring just ten seconds after the resumption with a fine score, Evan O'Carroll restored the gap to six with a converted free having been fouled himself.

Westmeath chipped away with two more Egan frees, before Evan O'Carroll ensured five points separated the sides. Westmeath should've had a goal fifty-two minutes in when Corroon took a shot on thirteen metres out - but Gareth Dillon pulled off a incredible block to deny the Westmeath midfielder.

Egan added two more for Westmeath before O'Carroll sent over a stunning point having side-stepped his marker. Westmeath went on a roll in the final ten minutes with Ronan O'Toole, Egan and Callum McCormack firing over to bring them within a point heading into injury-time.

Substitute Eoin Lowry doubled the Laois advantage to in the fifth minute of injury-time to give them some space, and when Denis Booth emerged with the ball from a long-pass in the referee sounded the final whistle as Laois held out for a two-point win.