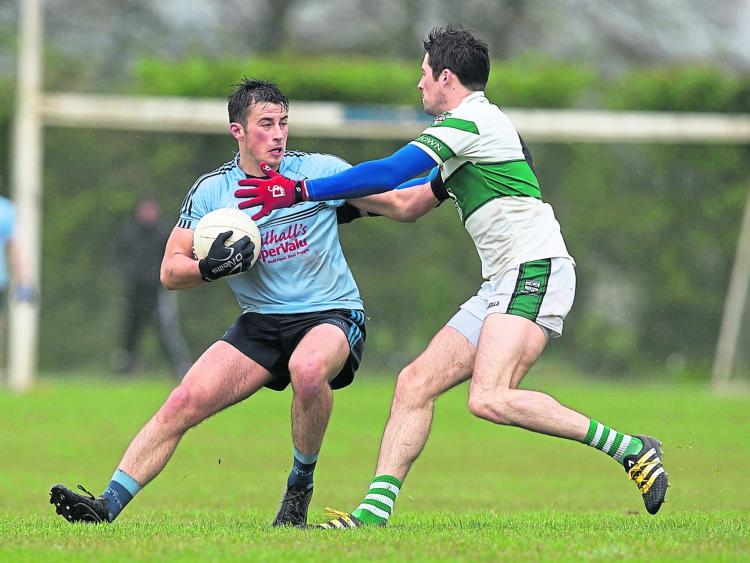 Conor Brennan and Conor Boyle in action in a league game last year.

Portlaoise consolidated their position in second place of ACFL Division 1A with a hard-fought win over Ballyroan Abbey on Tuesday night.

The reigning Laois SFC champions were seven points ahead at one stage late in the first half, but Ballyroan Abbey hauled themselves back on level terms midway through the second half. They just couldn’t edge themselves clear though, and Portlaoise eventually ground out a three-point win.

It was something of a missed chance for Ballyroan Abbey, as Portlaoise were well below full-strength. They lacked a bit of fluency at times, but Ballyroan Abbey deserve credit for that as their work rate was top notch and they got some wonderful scores over the course of the game.

Portlaoise had sounded an ominous warning in the opening minute when they carved Ballyroan Abbey open with their first attack, with Bruno McCormack swinging over the first score of the game.

Ballyroan Abbey had a gilt-edged chance to take the lead shortly after when a superb pass from Scott Conroy found Padraig McMahon through on goal, but his shot was brilliantly saved by Michael Nolan. Ronan McEvoy and Paddy Downey stretched the Portlaoise lead out to three, but Ballyroan Abbey responded well.

The impressive Enda McWey kicked two superb points to get them up and running, and then Scott Conroy curled over a 45 to level the scores. No sooner had they restored parity however, than Portlaoise surged ahead once more.

David Holland raced through on goal before squaring to Aaron Rafter to tap home the opening goal, and then Damon Larkin’s powerful low finish hit the back of the net to send them six ahead.

That left two between the teams, but Portlaoise hit a purple patch and rattled off five points on the trot, four of them from Ronan McEvoy to go seven clear. Scott Conroy hit another point in injury time, and that left Portlaoise 2-9 to 1-6 ahead at the break.

Ballyroan Abbey needed a strong start to the second half and that’s exactly what they got when Padraig McMahon bundled home an early goal. Ronan McEvoy hit back with a free for Portlaoise, but Ballyroan Abbey got the upper hand for a spell after that.

Scott Conroy curled over a couple of frees and then Padraig McMahon rounded off a good move with a point from 25 yards out to leave just one between the teams.

Portlaoise were struggling to get going in attack, and a brilliant individual score from Enda McWey saw Ballyroan Abbey level the scores at 2-10 apiece.

With ten minutes left it was up to either team to finish strong and it was Portlaoise who managed it, outscoring Ballyroan Abbey 0-4 to 0-1 in that period to claim the win. Bruno McCormack got two frees and Jack Brown and Damon Larkin got the others scores to eventually see the home side to a hard-fought win.