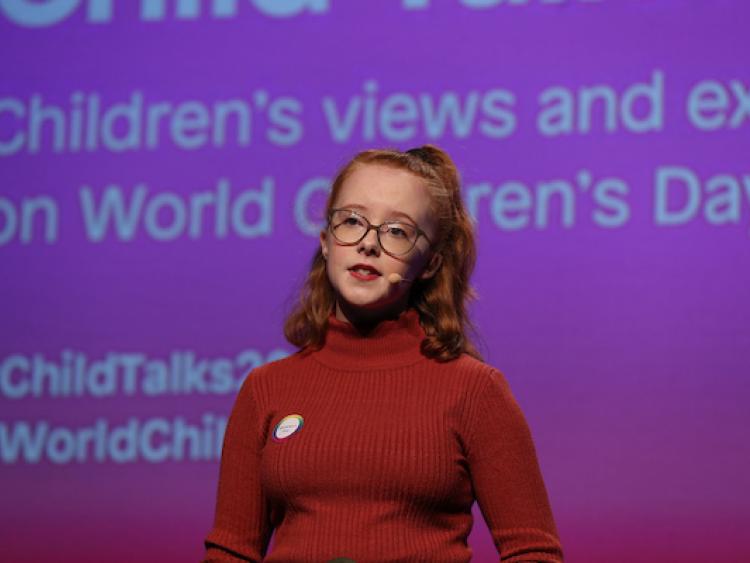 A Laois teenager took part in a national event featuring inspiring stories from children and young people as part of World Children’s Day.

14-year-old Carly Fagan took to the stage at the Printworks, Dublin Castle to take part in Child Talks, which was hosted by the Ombudsman for Children’s Office on World Children’s Day to highlight the importance of listening to children and considering their point of view. The event was opened by the Minister for Children and Youth Affairs, Katherine Zappone and was attended by over 400 people. It was also broadcast live on RTÉ News Now.

The nine young speakers who took part in Child Talks discussed mental health, disability, education, climate change and getting involved in politics. Carly, from Laois, used her talk to highlight the issue of period poverty and the challenges young girls in Ireland are facing.

“Girls are suffering without things like pads and tampons. Some are forced to miss school every month, causing them to miss out on their education.

“We need to let girls and young women know that their period isn’t something to be embarrassed of and that if they are struggling, with not being able to buy tampons or pads or that they feel self-conscious, it’s okay to talk.

“If we begin talking about periods and the issues surrounding them, there will be change. We need to realize that a woman’s access to sanitary products is her human right and that should never be denied.” Highlighting the importance of Child Talk the Ombudsman for Children, Dr Niall Muldoon said: “We celebrate World Children’s Day by listening to what young people have to say about issues that are important to them. As always, I am inspired by the abilities of young people and their inherent sense of fairness.

“This year marks the 30th anniversary of the UN Convention on the Rights of the Child. The young people today remind us that despite the progress made there is still more to do to protect and promote children's rights in Ireland. There are still too many young people on the fringes and too many young people falling between the cracks within Irish society.”