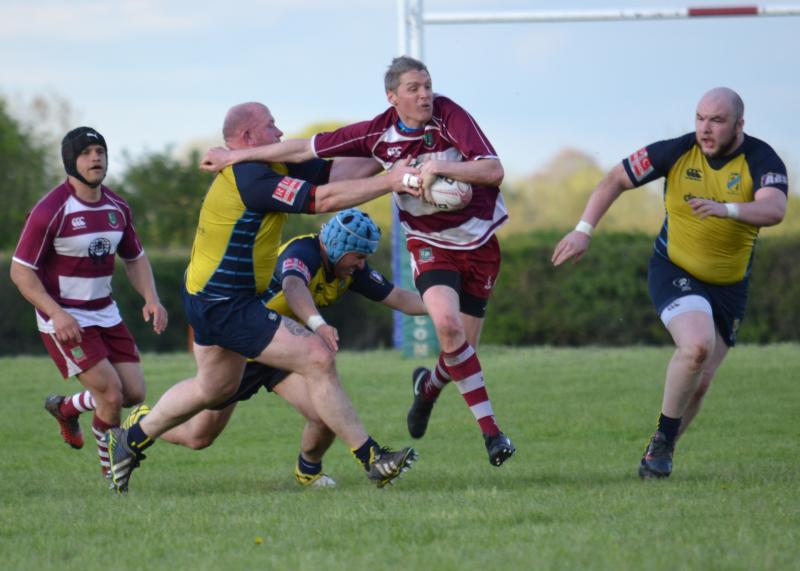 At the end of a disappointing season for their first team, Portarlington RFC’s second fifteen gave the club some cause for optimism as they won the Spiers Cup in dramatic fashion last Saturday evening.

A squad that was made up of eligible youths players, experienced campaigners and first team squad players returning from injury and absence saved the best till last, when a stunning team score finished off by Joander Brazon on the stroke of full time saw the Laois side taking the spoils after a highly entertaining game at Lea Road.

The early stages of the encounter saw a very youthful Clondalkin side taking the game to their hosts but a well organised and energetic Port defence managed to repel those early attacks. That resilience was then rewarded after 16 minutes when the home side chalked up the opening score through Simon Powell.

The try came at a cost though as the winger landed awkwardly when finishing and despite the best efforts of the team physio the influential back could not resume. Out half Kieran Hyland added the conversion but the loss of Powell was soon added to when he was joined on the injured last by his side’s most dangerous ball carrier Mark Petriw.

Despite these setbacks Port looked the most likely to score again thanks to the hard work of their pack, impressive game control from half backs Paul Mannion and Kieran Hyland and some powerful running from centres Armand Smit and Chris McCormack.

For their part, Clondalkin looked to move the ball wide and were a constant threat but they will have been happy that neither side could add more than a penalty kick each before the break considering that Portarlington had come away empty handed following four visits to their twenty two.

The second half saw Clondalkin wrestling control from their opponents as they began to get the better of possession and territorial advantage.

Some stubborn defending and a couple of important turnovers from captain Andrew Wilkinson, who had impressed in the first half with an explosive fifty metre break, frustrated the Dublin side for a while but eventually they made the pressure pay as they scored following a backline move that exploited space in the side channel.

That score and conversion tied the game up and Clondalkin then took the lead with a very similar score and the game’s momentum had now vey definitely shifted in their favour.

Port responded well though with Declan Hennessy, Colm Dowling, Joander Brazon and Mikey Boyhan making some significant yardage while Andrew Evans looked a real threat when returning the ball in hand from full back.

Evergreen winger Darran Hennessy showed pace beyond his years in attack and the introduction of former Laois football star Hughie Emerson provided some valuable experience in the pack.

A Hyland penalty meant that Port were within striking distance of their opponents as the game entered the final ten minutes but it seemed like the Clondalkin defence would hang on as they managed to clear their lines whenever pressurised.

However, with time up Port had one last opportunity to snatch victory but with the ball deep in their own half it would take something special to find the score that they required. That something special started with another penetrating run from McCormack and when he was stopped inside Clondalkin territory Mannion fed under eighteens captain Arran Maher.

The prop powered through a double tackle before releasing the ball with a masterful offload to Brazon who stepped into a gap and finished under the posts to the delight of the large home crowd. Hyland popped over the extras and the final whistle that followed was greeted by on-field celebrations from Portarlington’s players while Clondalkin’s men were left looking shocked.

The victory will be greeted with enthusiasm by Portarlington’s Director of Rugby Pádraig Mahon who himself played in the second row on the day.

Mahon will feel that this success will pay dividends having given him the opportunity to introduce some young players to senior rugby while demonstrating to the more experienced players that they still can play a vital role in the development of the squad and it’s future success.