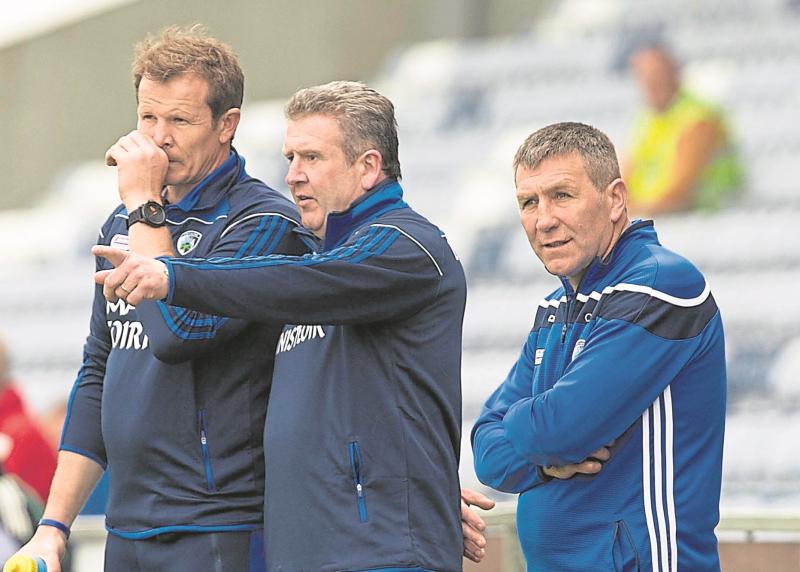 The Laois management watch on against Carlow in the Joe McDonagh Cup at O'Moore Park. Pic Alf Harvey

Not for the first time this year the performance of his Laois senior hurling team left Eamonn Kelly at a loss as to why they had fallen to a ten point defeat.

The Tipp man witnessed what could have been the worst display of his tenure in O'Moore Park on Saturday, as he was once again left bereft of answers as to why they had failed to fire.

“It's disappointing, it's very difficult to figure it out” said Kelly outside the team dressing room after the game.
“We even played a challenge game last week for a lot of the guys that are on the fringes of the panel, and they were all chomping at the bit. We thought we were in great form coming into it, it's quite frustrating not to see it.

“It's disappointing to lose, but it's worse altogether when you don't perform to your potential, and that's the part of it that's frustrating.
“We could have no complaints, I thought, to be fair to Carlow, they were very economical with the ball, they seemed to want it more, there was two or three of them around every break.
“We were trying a few short passes and the lads were being a little bit tentative, and they were being intercepted, and every time that happened they punished us.”

The tone was set early on as Carlow lead 1-4 to 0-1 after just nine minutes. “Yeah, it was a very bad start, we kind of clawed our way back into it against the run of play” said Kelly.
“We said we'd set up with Paddy (Purcell) as sweeper and try to get us to settle, but it was they who got the start that we needed. To be fair to them, they were good value for the win, they caused us trouble all over the field.”

It was the flat nature, once again, of Laois' performance which was so frustrating, with Kelly having felt they were in good shape coming into the game. “That's very difficult to figure out, you're asking questions 'where did it go wrong?'
“It has just been flat, in the dressing room the lads are busting to get out, and unfortunately they are not expressing themselves on the field, so it's very disappointing. It's put us in a very tough situation now, up to play Meath next week and the loser of that is going down.”

His team were missing a handful of regulars too, as Lee Cleere's suspension was compounded by injuries to key players. “Cha went off injured against Antrim, and up to last night we didn't know was he going to be able to tog out at all, that's the first time he's picked up a hurl (since Antrim).

“Ross King did his groin in training during the week and PJ Scully got his appendix out and Mark Dowling did his hamstring with the U-21s, but you could say the same thing about Carlow, they were down a few players as well. What you have, you have to try to get the best out of, and unfortunately we didn't.”