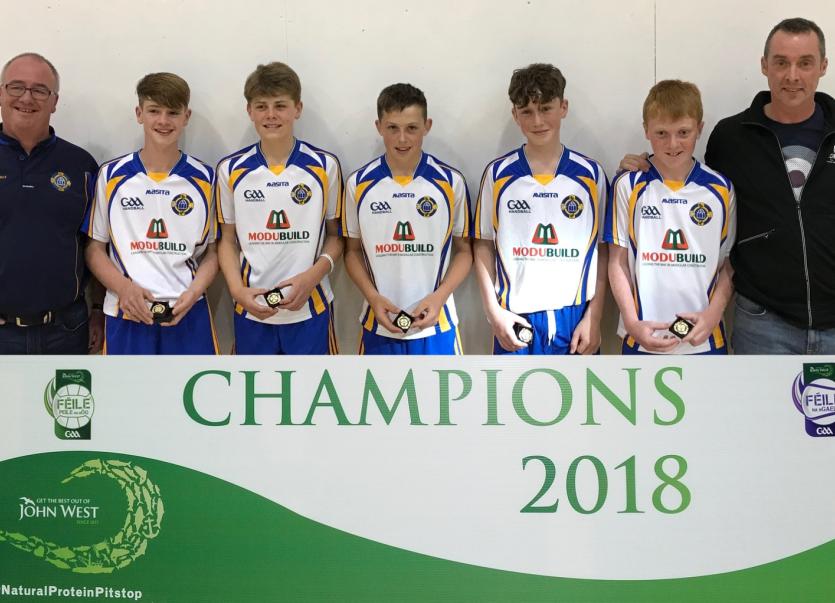 A team of five boys from Clough Ballacolla handball club were crowned division one winners of this years One Wall John West Féile na nGael Handball Competition which was held in Galway making them the first laois ever to win the One Wall title.

The Laois lads opened the days proceedings with a convincing win over Millmount of Louth. Adam Gorman and Kevin Hyland were up first and won their game 31-8. Thomas Brennan and Joseph Pearson then stepped up to the mark and had an amazing 31-01 win.

In Round 2 the lads lost to tournament favourites Mountbellew Moylough of Galway by a very narrow margin. This did not deter the Laois boys who went on to beat Rhode of Offaly in Round 3.

Tommy Brennan and Joseph Pearson continued with their consistent form beating their Offaly opponents 31 - 3. Clough Ballacolla changed the second team for this match Sean Byrne stepped in with Kevin Hyland to win 24-10.

In Round 4 the boys met a very talented team from Oughterard Galway. At this stage in the competition the atmosphere was electric with the very large local crowd becoming very vocal. This round finished in a draw with each team taking one Game.

This left the Laois team in second place in the round robin format which meant they had secured a place in the Division one All Ireland final against Mountbellew Moylough of Galway. Mountbellew had had beaten both Clough Ballacolla pairings earlier in the day and had also won every other game that they played throughout the day, so they were entering the final as strong favourites to take the title.

To win the final a team had to win both of their games, if each club won one game the points from each game would be added to decide on winning team.

The Clough Ballacolla mentors made a tactical change in the order of play just before the final commenced and this paid off. Throughout the day Tommy Brennan and Joseph Pearson had been playing second the second game in each match.

Mountbellew had been putting out a very strong pairing for their first game for every match so Clough Ballacolla put out Joseph Pearson and Tommy Brennan for the first game of the final. Mountbellew were cheered on by the large local crowd and got off to a great start, clocking up 13 unanswered points.

Brennan and Pearson remained calm and stuck rigidly to the game plan. Around nine minutes into the game the Laois pair started steadily clocking up points to come back from being down 13-0.

The Galway lads were suddenly under pressure and it looked as if Pearson and Brennan were going to take the game however time ran out with them finishing 17-18, this put the laois in a very strong position going into the last game.

For the second game of the final Kevin Hyland and Adam Gorman came out with some amazing skill from the outset. It seemed as if Mountbellew were not prepared for the onslaught and Hyland began clocking up scores at a steady pace.

Gorman and Hyland played their best ever handball during that game and went on to win the Game 31-6. There were lots of tears of joy when Clough Ballacolla were crowned winners.