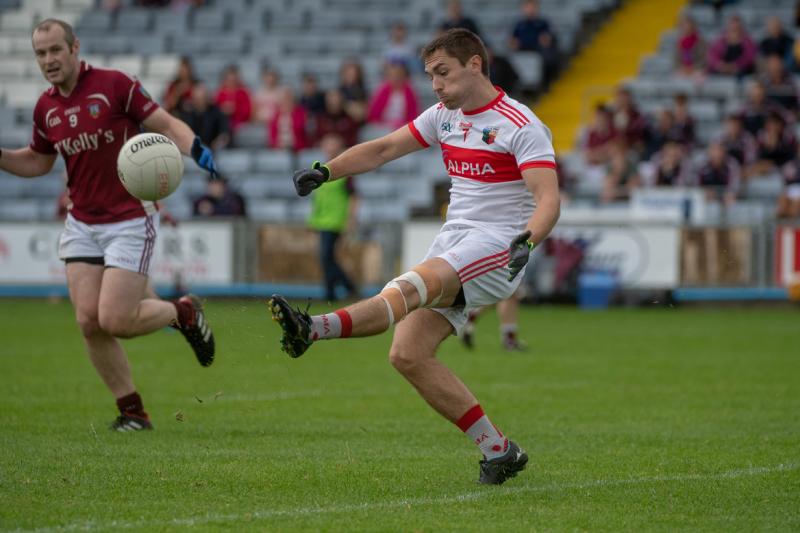 Emo and Arles-Kilcruise locked horns in the second game played on Sunday afternoon in O’Moore Park, and Emo fought hard for a victory in an entertaining game of football.

The win for Emo now means they have secured a place in the quarter-final, as they were also victorious against Arles-Killeen in round one. Arles-Kilcruise will have to face down Ballyroan Abbey, the side who beat them in the Division 1B league final, in round three of the competition.

Emo were quick off the mark as Nigel Murphy put over the first score of the game directly from the throw in.  This was quickly cancelled out however, as Stephen Miller found Caomhan Brennan a minute later to place the ball past Niall Gorman in goals.
This put the Arles-Kilcruise men on the front foot as Brennan added another excellent point from a tight angle and Cialann Mulhall followed with another.

Darren Strong responded for Emo after what was an entertaining start to the game, with Arles-Kilcruise leading 1-2 to 0-2 after six minutes.  Emo then began to take control as Arles-Kilcruise struggled to get scores.

Darren Strong was really effective in midfield as Emo made some great turn overs. Strong and Brian Gorman both added further points for Emo, while at the other end PJ Lawlor put over a point for Arles-Kilcruise after they were left scoreless for 12 minutes.

Stephen Norton and Strong added further points for Emo. Ross Munnelly converted two frees for Arles-Kilcruise before the break, but the half time score saw Emo lead 0-9 to 1-5.

Emo were slow to get on the attack in the beginning of the second half. Their backs began to fell the pressure, as Munnelly in particular began to find some space. Munnelly opened the scoring with a 21 yard free and, after hitting two wides, he followed up with a well taken point a few minutes later.

Anthony McElroy then put over another point for Arles-Kilcruise to leave them leading 1-9 to 0-10 after 40 minutes.

Emo then had their purple patch as Jack Owens burst down the field to point for his side. The turning point of the game then came when Nigel Murphy got in for goal. Darren Strong made a good solo run down the field to find Murphy free to place the ball into the back of the net. This left Emo leading 1-13 to 1-10 after 50 minutes.

Arles did respond with frees from Chris Conway, but it was Emo who were the better side, and points from Jack Owens and Paul Lawlor ensured them of a two point victory.