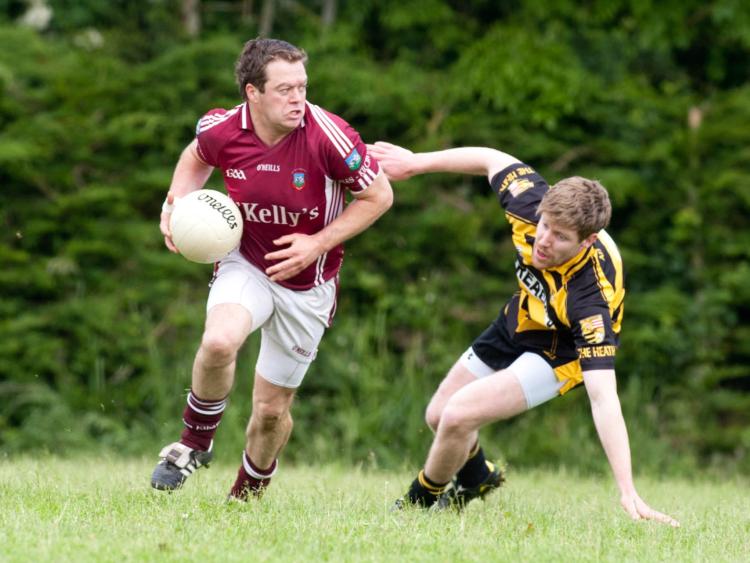 Arles-Kilcruise and The Heath had to settle for a point apiece after a typically tense relegation affair ended in a stalemate. Neither will be particularly pleased with the result, but it does mean they both gain a point on Ballyroan Abbey.

Brendan Conway got the hosts up and running with a fine point after Kevin Meaney picked up the breaking ball.

The Heath played against the wind in the first half, and while that's never easy to deal with, their shot selection at times was poor. Arles-Kilcruise doubled their advantage after older brother Chris Conway offloaded to David and he fired over.

Although he looked to be crossing the ball across the square, Dylan Waters’ ball ended up going over off the post. Chris Conway added a fourth point with a free, and David Conway grabbed Arles-Kilcruise’s fifth after he ran at The Heath and swung over off his left.

Fran Egan curled over off a placed ball from distance, before The Heath finally opened their account through Evin Keane when he fisted over after great work from younger brother Neil.

David Conway put over his third point after he showed well for a quick Fran Egan free, and then Egan popped over the next free he was given.

Arles-Kilcruise had one of the few goal chances shortly after. David Conway robbed The Heath in their effort at a short kick-out, fed Caomhann Brennan, but The Heath's keeper Joseph Walshe stood up well to the shot. Dylan Waters' rebounded shot thundered off the crossbar.

Chris Conway (free) and Evin Keane traded scores at the end of the half, as the home side led 0-9 to 0-2.

Evin Keane then broke through several tackles at pace before firing over off his left boot for The Heath's second point of the half, and he grabbed another from a difficult angle to leave four separating the sides.

Andrew Booth left the difference at three after strong running from Brian Ging. However, Ging received his marching orders along with Arles-Kilcruise’s Caomhann Brennan after the pair got involved in an off-the-ball incident.

Arles-Kilcruise needed to settle down, and veteran Chris Conway kicked over a free to settle his side a bit.

Jimmy Nerney and Daithi Carroll both pointed to leave just two between the teams, and then midfielder Shane Forde left the gap at the minimum after tireless defending from The Heath.

Evin Keane kicked the equaliser after a brilliant ball was fed into him by Jimmy Nerney, and Keane split the posts off his weaker foot.

Egan thought he won it for Arles-Kilcruise from a converted placed ball after serious running from David Conway earned his team the free, but Evin Keane showed nerves of steel to earn a much-needed point for his side.