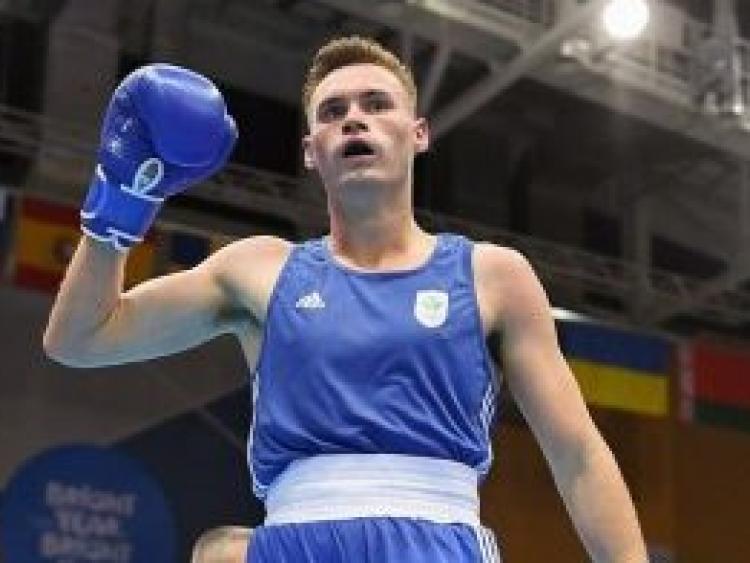 Michal Nevin seals victory in Minsk at the European Games.

Laois boxer Michael Nevin has made it to the winner’s podium at the European Games and is looking forward to his next bout with a gold medal in his sights following a 'top class' performance.

The Portlaoise Boxing Club fighter claimed bronze at the games in Minsk men's middleweight 75kg division following a classy victory over a Turkish opponent on Tuesday.

The 4-1 verdict over the Turk was the third win in four days for the Laois man.

“I’m feeling good, happy with my performance. On to the next one now,” said the former European schoolboy, junior and youth champion afterwards.

“Michael Nevin has just put in a top-class performance in his victory over Turkey to guarantee another medal. Was a fantastic bout and great to see him perform as he did,” he said.

Ireland's boxing team has won 11 of 15 contests so far at the 2nd edition of the games.

If Michael wins his semi-final he will be in with a chance to win gold. The semi-finals and finals at the 44-nation tournament will be decided on Friday, Saturday and Sunday.

Nevin's coach, Pat Ryan, is proud of the medalist.

“Michael is an extremely talented young boxer. He is a very level headed young man. He is very definite and clear minded on what he wants to achieve. I have absolutely no doubt he will achieve many, if not all of the highest accolades in the sport of boxing, his one and only love,” he said.