Park-Ratheniska-Spink revel in huge U13 'A' football success

Park Ratheniska- Spink recorded a famous championship win on Saturday after super sub Alex Sheehan kicked the last two points of the game to claim the U13 'A' football title.

A tight affair throughout, the sides were level coming into the final stretch before Sheehan landed two fine scores to send them into dreamland.

Portarlington made the better start to the game and were off the mark early with Sean Michael Ward and Cathal Ward giving them an early two point lead inside the opening few minutes.

There was no panic on the Park Ratheniska-Spink contingent and they sat about making their claim to the title when Barry Connolly opened their account. They had keeper Ethan Kelly in fine form all morning and he was called into action to deny Aaron Twomey.

Port then hit the crossbar as lady luck deserted them and when Conor Headon landed a long range point, the sides were locked at 0-2 each at the opening water break.

Portarlington used the water break well and gathered themselves to land two points from Sean Moran, one from a free and one from play to take back the lead. However, Park Ratheniska-Spink were not there to make up the numbers and once again, they answered back through Barry Connolly.

The clutch score of the opening half came with the last kick of the half after a shot that came back off the crossbar fell to Conor Moran. Moran danced around two defenders and coolly slotted to the net to give the Port youngsters a 1-5 to 0-5 lead at half time.

Soon after the restart, Port went five points clear thanks to Sean Moran and Sean Michael Ward as it looked like they would see the game out.

Park Ratheniska-Spink had other ideas and Jack Dermody got them back into the game and cut the gap to four. It was a rousing score that sparked them back to life.

With the next attack, they smelled blood and after the ball was worked through the lines, Ciaran Skelly was on hand to drive low to the net and suddenly, there was only one point between the sides and Portarlington were on the ropes.

Before the second half water break arrived, the sides were level as Barry Connolly curled over another free to leave it 1-7 each.

Both sides were now feeling the pressure but Dan Downey kicked the eventual winners into the lead before, once again, Ethan Kelly was called into action in the goals to deny Portarlington.

The game was level again soon after that when Sean Moran fired over and we were in for a bumper finish.

In the end, it was Park Ratheniska-Spink who pulled away. With four minutes to go, substitute Alex Sheehan scored one of the scores of the day to put them ahead by one and with a minute to go, Sheehan doubled his tally to push the final margin out to two points on a famous day for Park Ratheniska-Spink. 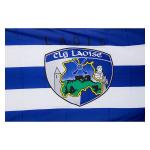